Mirror, mirror on the wall

Mirroring as a technique to improve rapport with jurors

Mirroring is the behavior in which one person copies another person’s gestures, movements, body language, tone and expressions. The purpose of mirroring is to improve rapport. One group of researchers has found that when a waitress mimicked her customers, her tip amounts significantly increased. I’m not suggesting that trial attorneys are waitresses; or that jurors are customers; or that verdicts are tips; but mirroring will increase your rapport with jurors.

Researchers believe that mimicking is hard-wired in the human brain. Infants have been shown to smile, stick out their tongues, and open their mouths when they see someone else doing the same. Scientists have found that the parietal and pre-motor cortices of the brain contain mirror neurons. Mirror neurons are active when one watches someone perform an action; as well as when one performs the action oneself.

Mirroring has been referred to as a chameleon effect. This type of mimicry occurs outside the conscious awareness, and without any attempt to imitate. In the article “The Chameleon Effect as Social Glue: Evidence for the Evolutionary Significance of Non-Conscious Mimicry” in the Journal of Non-Verbal Behavior 27(3), Fall 2003, the authors state:

Initially, mimicry may have had survival value by helping humans communicate. We propose that the purpose of mimicry has now evolved to serve a social function. Non-conscious behavior mimicry increases affiliation which serves to foster relationships with others.

The authors note that our ancestors lived in an environment in which individuals who were on their own were not always able to survive or successfully reproduce. Being accepted into a group assisted in locating and securing food sources and shelter, and defending against predators.

Each of us has engaged in mirroring or mimicry and subconsciously experienced others who have mirrored us. When you meet someone for the first time, your subconscious quickly assesses whether they are friend or foe, just as other animals do for survival reasons. When two people engage in non-verbal mirroring, the subconscious recognizes that the other person is just like them. This urge to mirror others is hard-wired into the brain because cooperation leads to being accepted into a community and the community provides safety and security.

While this may be of interest to scientists, how can trial lawyers tap into this and make it work for their clients? In a study performed in the late 1960s, researchers found that people perceived others as more similar to them when their behaviors were congruent. People who show similar postures are judged to have higher rapport. Mirroring with a person during conversation establishes feelings of closeness and rapport. This develops trust. What could be better than trust between a trial lawyer and a juror?

Non-conscious mirroring, the adoption of behavior, postures, or mannerisms of others, allows individuals to maintain harmonious relationships with fellow group members. Consider when two people live together for a long time and enjoy a good relationship. They are constantly mirroring each other’s facial and verbal expressions.

As trial attorneys, we do not have years to form a relationship with a juror. The bond must be formed within minutes. Can this be accomplished? It can. Think of someone who is charismatic: a politician, an actor, an uncle or a colleague. What makes that person charismatic and why do we immediately form that favorable impression? These are questions that we do not consider when listening to the charismatic speaker. We cannot explain why, but we know there is a “chemistry” between us and the speaker. We feel like we “clicked.” It is possible that this person has mirrored us. When there is a similarity of expression and/or movement, we subconsciously believe that person is friendly.

If this is true, how can a trial lawyer learn to effectively mirror the prospective jurors during voir dire?

Although mirroring is about making a connection with the unconscious mind, to successfully use mirroring you need to consciously practice it. Begin your study of mirroring by observing groups of people who are comfortable interacting with one another. Watch their body language. Listen to their tone of voice. Notice the speed of speech.

When you have watched a number of people and observed how they mirror one another, next try to mirror people with whom you are friendly. If they use their left hand to brush the hair from their face, use your opposite hand (the mirror image) to brush the hair from your face. This is called postural mirror-image mirroring. Although not as effective, if the person moves the left hand and you move your left hand, a subconscious connection is still created.

One can also practice crossover mirroring. This occurs when one person’s movement is matched with a different movement. If a person is tapping their hand on the desk, you might consider tapping your foot with the same rhythm. If a person moves his leg, you can do a crossover mirror by moving your arm.

One effective mirroring technique is to mirror a person’s breathing. Develop the ability to inhale when they inhale and exhale when they exhale. Unless a person is short of breath, it will be difficult to differentiate inhalation from exhalation. Instead of looking at a person’s chest, look at their shoulders. The shoulders rise on inhalation and fall on exhalation.

Some believe that you can cause another person to mirror you. Think about the times someone you don’t know has smiled at you. Without consciously intending to smile back, you do so. When someone raises their hand and gives you a slight wave, you instinctively wave back. Watch how people in a group will smile or frown along with the speaker.

Before you attempt to mirror your juror’s movements or their manner of speech, you have to practice mirroring so that you do so subconsciously. If the person you mirror perceives that you are deliberately doing so, you not only fail to create a rapport, you create suspicion and hostility. The most important rule to follow in mirroring is to be subtle. Your mirroring should seem as if it were an unintentional byproduct of two minds. The more you practice mirroring out-side of court, the more natural it will be.

Don’t try to imitate every gesture every time. When the juror is talking, observe the gestures they use and use those gestures when you are speaking to the juror.

Mirroring is just one of the many techniques that a trial lawyer can use to build rapport. No one technique is the silver bullet that will cause you to win every case. If the facts are against you and the law is against you, you will probably lose. Mirroring, however, will assist in establishing a rapport so that your jurors don’t start out rooting for the other attorney. 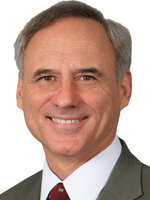 John F. Denove specializes in major injury cases, product liability, medical malpractice and insurance bad faith litigation with Cheong, Denove, Rowell, Bennett & Hapuarachy. He has tried more than 150 civil jury trials to verdict. He was named Consumer Attorneys Association of Los Angeles Trial Lawyer of the Year in 1993 and received the Ted Horn Memorial Award in 2001. He also received the CAOC/CTLA Presidential Award of Merit in 1994, 1996, 2000, 2008, 2013 and 2014; CAOCs Outstanding President of the Year Award in 2000 and the Edward I. Pollock Award in 2006. It was his honor to serve as President of the following associations: CAALA, the Los Angeles Chapter of the American Board of Trial Advocates (ABOTA), the Italian Lawyers Association and the Cowboy Lawyers Association. He currently serves on CAOC’s Board of Directors. He is a Diplomate of the American Board of Trial Advocates and is a member of American Association for Justice (AAJ) and Public Justice. Mr. Denove was named the 2017 Loyola Law School Champion of Justice Honoree. In 2018, he was inducted into the CAALA Hall of Fame.