Truly “meeting and conferring,” with proper preparation, can help identify and resolve key issues in your case and prevent delays

It is common knowledge that with the shrinkage of court budgets resulting in layoffs, unfilled positions and like difficulties, the amount of time any judicial officer can devote to a specific case is significantly affected. Practitioners realize this when they try to set motions, which may result in hearing dates months into the future. In turn, trial dates are affected, and justice is delayed.

These difficulties can sometimes be considerably mitigated by one seemingly innocuous yet frequently overlooked practice: knowing your case and the other side’s case as much as possible before attending the Case Management Conference (CMC). This is done by the effective use of California Rules of Court (CRC) 3.724, the requirement to meet-and-confer.

Sitting for over 10 years in a downtown IC court, I have noticed that many lawyers treat the CMC as a TSC (Trial Setting Conference), appearing only for the purpose of obtaining Final Status Conference (FSC) and trial dates, and ignoring the mandate of rule 3.724. The proliferation of “appearance attorneys” at the CMC who advise the court that their only instruction is to get the dates aforesaid is an example of this trend.

If the Judicial Council had intended for the CMC to be simply a TSC, it would not have spent several pages of rules discussing the CMC (CRC 3.722 et seq.). Indeed, CRC 3.721 requires the court to “review” the case within 180 days of filing. Rule 3.722(a) requires the court to “review the case comprehensively” (emphasis added.) The rules then go on to explain, in detail, how that review is to take place.

A critical part of the review is rule 3.724 which requires the parties to meet-and-confer before the CMC and consider among other matters the following:

(4) Identifying the facts and issues in the case that are in dispute.

Many times attorneys appearing before me have violated the rule by not having met and conferred or having so inadequately done so that when they tell me their respective positions at the CMC, surprise by the opposing side surfaces. Indeed, often documents are alluded to at the CMC that have not been exchanged or even discussed at the meet-and-confer. In one recent case of alleged wrongful termination, the defense at the CMC referred to a written “Notice of Abandonment of Position” allegedly sent to plaintiff warning him to return to work or be terminated. This potentially important piece of evidence came as a complete surprise to plaintiff at the CMC, and had obviously not been discussed at the meet-and-confer. Its disclosure may well have resulted in further discussions helpful in eventual resolution of the matter.

Rule 3.722(c) requires the attorney appearing at the CMC be “familiar with the case…and (she/he) must be prepared to discuss and commit to the party’s position on the issues listed in rules 3.724 and 3.727.” In other words, after the meet-and-confer, counsel should be in a position to discuss the facts and issues involved in the case, and certainly know his/her own side’s facts and position. The court can then get involved and discuss the matter further with counsel. Often these discussions can be of assistance to counsel in the further handling of the matter. If counsel is unprepared to discuss, obviously this opportunity is lost, which may result in a repeat CMC (3.723). Thus, the importance of the presence of the handling attorney (not required under the rules, but very helpful) or at least a fully briefed substitute, is obvious.

Also bear in mind that the violation of any of the rules relating to the CMC may result in the imposition of sanctions under CRC 2.30, including, but not limited to, the reimbursement of every other party to the case (if themselves compliant) for attorney fees incurred in the non-productive CMC.

The purpose of Civil Case Management is to “…secure the fair, timely, and efficient disposition of every civil case….” (CRC 3.700.) Thorough preparation for the CMC, including the meet-and-confer requirements of rule 3.724, goes a long way toward achieving these goals. 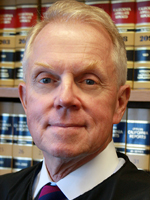 Hon. Rolf M Treu received his B.A.degree from the University of Redlands in 1970 and his J.D. from Loyola University in 1974. Following a 20-year practice, the majority of which was dedicated to plaintiff tort litigation, Judge Treu was appointed to the Municipal Court in 1995 by Governor Pete Wilson, and served as Presiding Judge of the Citrus Judicial District (West Covina) in 1999 and 2000 until unification. Since 2001, he has been sitting in the Mosk Courthouse, first assigned to Family Law, and in 2004 to General Civil, where he sits in Department 58. Judge Treu is assigned to the following Superior Court committees: Bench/Bar, Research Attorney/ Law Clerk; he has also served on the Rules Committee and the Asbestos Trial Assignment Committee.