Undermining the opinions of defense radiologists in spinal-injury cases

What follows is a discussion on how to undermine the opinions of defense radiologists in spinal-injury cases. It is presumed the reader already has a good understanding of radiographic imaging and spinal structures. Terms like MRI, disc desiccation, and radicular pain are not defined herein.

Topic headings are structured as if testified to by the defense radiologist, followed by counter arguments and supporting medical literature. Procedural and trial recommendations are set forth at the end of the article. This article is intended to be the beginning of a working document, and CAALA members are encouraged to post additional methods and medical literature relating to these topics on the CAALA listserve.

“There is no compression on the nerve. Compression is needed to cause pain/radicular pain.”

This is simply not true. There are a number of pathophysiological reasons for pain and radicular pain other than compression on nerve fibers. There are nerve endings in the spinal structures aside from the nerve roots that may be irritated by a disc herniation, which in turn can cause pain. For example, it is well known that the posterior longitudinal ligament is highly innervated. Virtually all posterior disc herniations will press against the posterior longitudinal ligament, which can cause pain. Back pain, including radicular pain, can also be caused by a chemical disc or chemical radiculitis. This is also referred to in medical literature as discogenic pain syndrome and internal disc disruption.

Chemical radiculitis is an inflammatory condition of the nerve root due to the rupture of the annulus fibers and dissemination of nucleus pulposus disc fluid along the nerve root. This dissemination of disc fluid may not be visible on an MRI because it generally has similar water content as the surrounding tissues. (Peng, B. Chemical Radiculitis. Pain. 2007 Jan; 127 (1-2):11-6.) The nucleus pulposus disc material contains chemical mediators and inflammatory cytokines, which are produced in an injured disc. These materials irritate nerves and cause pain. The materials leak into the epidural space through annular tears and irritate the adjacent nerve roots, causing pain and radicular pain. (Ibid.)

Discography (discograms) provides helpful data in the identification of pathology consistent with chemical radiculitis and chemical disc. During a discogram, dye is injected into the nucleus of multiple discs to increase the pressure of the disc. The idea is to reproduce the back pain/radicular pain regularly felt by the patient to identify the injured discs which are the source of pain. Contemporaneous x-rays that show the dye are taken during the procedure. Not only are these x-rays great visual tools to use at trial, but they also indicate pathology consistent with chemical radiculitis, chemical disc, and a mechanically compromised disc.

The location of the dye in relation to the disc is a method used to determine the type of disc injury. For example, there is a strong case for chemical radiculitis if the dye (shown on x-ray) leaks through the disc into the adjacent spinal structures through tears in the annulus. Often overlooked by attorneys, and also physicians, is the psi at the point of reproduced concordant pain. Unfortunately some discogram reports fail to even identify psi. The pressure at which concordant pain is reproduced is key in evaluating whether the disc is chemically or mechanically sensitive. If concordant pain is reproduced at a pressure less than 15 psi, the disc is considered chemically sensitive consistent with a chemical disc. If pain is reproduced between 15 and 50 psi, the disc is mechanically sensitive. (Derby R. et al. The ability of pressure-controlled discography to predict surgical and nonsurgical outcomes. Spine. 1999; 24(4):364-71.)

There is medical literature that suggests radiating pain is not even caused by compression at all. “Physical pressure on a peripheral nerve does not produce pain; it produces paresthesia.” (Macnab’s Backache, 4th Edition, Wong and Transfeldt, Lippincott 2007, Ch. 4:83.) So what’s causing the pain? According to Macnab, it is the “red and angry” injured nerve, not the continuous compression on the nerve. Macnab stops there. However, it logically follows that nerve fibers can sustain injury and become “angry” during the split second of hyperextension in a rear-end collision. From a biomechanical standpoint the hyperextension impacts the nerve root, causing injury to the actual nerve fibers resulting in radiating pain. The impact on the nerve is sudden and acute, like a crushing injury. It is not sustained as nerve root compression in normal posture, but the damage is done. The nerve fibers (at least sensory) are injured irrespective of whether there is continuous compression. There is no medical literature in support of this concept known to the authors; it is a theory which seemingly reconciles Macnab’s finding with a plausible biomechanical cause. It should be noted that Macnab’s Backache is commonly cited by defense radiologists in support of their opinions. It is a must-read for Plaintiff’s attorneys.

“There are no signs of acute injury on these films. The findings must be/are degenerative.”

This is probably the most common argument raised by the defense radiologists. Evidence of acute injury on radiographic imaging is obviously good ammunition against this argument. There are findings on MRI which are consistent with acute injury. For example, defense radiologist will agree that disc herniations associated with inflammation, edema (swelling), and hemorrhage/bleeding (which may be read as granulation tissue) tend to be consistent with acute injury. These findings will appear as white high intensity zones on T2-weighted MRI imaging. These high intensity zones are relatively easy to see even by the untrained.

The appearance of a disc herniation will also tend to show whether it is acute or longstanding. Most defense radiologists will agree that focal disc herniations, as opposed to broad based, are generally regarded as more likely to be acute. Disc extrusions, where disc material actually extrudes above or below the disc space, tend to be acute as opposed to degenerative.

Additionally, radiology reports will not address whether a finding is acute or longstanding. It is not the role of an interpreting radiologist to note whether a finding on radiographic imaging is acute or longstanding. A radiologist simply identifies the findings, they do not date them. Review radiographic imaging with your experts to see if there are any signs of acute injury before expert discovery. There may be multiple findings on the imaging that suggest acute injury which are not delineated in the interpreting radiologist’s report.

Most often there are no signs of acute injury on an MRI simply because there is no MRI taken during the acute phase of the injury. Edema and inflammation will be resorbed by the body over time. This medical phenomenon is no different than the resorption of swelling when you injure your knee. Studies have shown significant resorption (phagocytosis) of herniated disc material within two months of acute injury. (Reijo A. Autio et al, Determinants of Spontaneous Resorption of Intervertebral Disc Herniations SPINE 2006; 3;1247-1252. See also El Barzouhi et al. Magnetic resonance imaging in follow-up assessment of sciatica. N. Engl. J. Med.2013; 368:999-1007.)

Defense radiologists almost always contend any disc pathology/herniation (bulge, protrusion, extrusion, or fragment) is degenerative. The absence of other degenerative findings raises considerable doubt to this argument. Carefully analyze whether there are other signs of degeneration in the spinal structures with your own experts. Disc pathology/herniations without other degeneration changes tend to show the existing disc pathology/herniation is acute. Common degenerative changes include endplate changes, modic changes in the vertebrae (caution: this is similar in appearance to a compression fracture), disc desiccation, disc height collapse, bony changes (spurs/osteophytes). A disc protrusion in a disc without desiccation and normal disc height will more likely be acute.

“Annular tears are degenerative, and not caused by acute trauma.”

Without studies to indicate otherwise, defense radiologists simply testify that annular tears are only caused by disc degeneration. Pre- and post-traumatic event imaging would be required to determine if annular tears can be caused acutely. It might be a little tough to get volunteers for that kind of study, which explains the lack of literature on the subject. Cadaver testing however, has confirmed acute annular tears caused by an acute event (rear-end impact). Yoganandan, N. et al. Whiplash Injury Determination With Conventional Spine Imaging and Cryomicrotomy. 2001. SPINE Volume 26, Number 22, pp 2443-2448. Macnab’s Backache is often cited by defense radiologists in support of their opinion that annular tears are only caused by degeneration. Nowhere in the 400-plus pages of Macnab’s Backache latest edition does it say that.

“If there was an acute disc herniation, the Plaintiff would have immediate radicular pain.”

This is a favorite amongst defense radiologists. It is also not true. It has been reported that in the first several days of an acute disc herniation, the patient will only feel back pain, and not radicular pain. (Macnab’s Backache, 4th Edition, Wong and Transfeldt, Lippincott 2007, 4:83.) Acute injury does not always result in acute inflammation which leads to pain. For example, a traumatic event may cause a hemorrhagic response which can be a slow process. Inflammation and edema may take time to manifest and accumulate to the point in which it causes pain. Dissemination of disc contents through tears in the annulus will not necessarily occur spontaneously with a traumatic event, but rather will leak slowly over time.

“The plaintiff has an underlying degenerative condition which would have eventually caused pain absent this collision/incident.”

Defense radiologists and orthopedists will sometimes argue the plaintiff would have eventually developed pain absent the collision/incident because of underlying degenerative disc disease. This theory has largely been debunked by numerous studies. A group of 67 asymptomatic individuals were followed in a seven-year study with MRI imaging of the lumbar spine. The study concluded: “The findings on magnetic resonance scans were not predictive of the development or duration of low-back pain. Individuals with the longest duration of low-back pain did not have the greatest degree of anatomical abnormality on the original.” (Borenstein D, O’Mara JW, et al, The value of magnetic resonance imaging of the lumbar spine to predict low-back pain in asymptomatic subjects: a seven-year follow-up study. J Bone Joint Surg. Am. 2001 Sep;83-A(9):1306-11.) With progressive disc degeneration there is no predictive correlation between MRI findings and the continuation or progression of pain. (Masui T, et al. Natural History of Patients with Lumbar Disc Herniation Observed by MRI for Minimum of 7 Years. J. Spinal Disord. Tech. 2005; 18(2):121.)

Disc degeneration does occur as part of the normal aging process, but often remains asymptomatic. Radiographic evidence of degenerative changes in the lumbar spine, of course, increases with age. Although difficult to believe, the maximum incidence of backache has a peak at age 45 and thereafter tends to decline even though the degeneration worsens. (Macnab I. Backache. Baltimore: Williams & Wilkins; 1977:90.) There is no medical data to support an opinion that degeneration in an older Plaintiff will lead to pain.

If the defense designates a radiologist, consider retaining your own radiologist and designating them as a supplemental expert for rebuttal. This will allow you to call your radiologist as the last witness at trial. The opinions of your radiologist, as opposed to the defendant’s, will be the last evidence heard by the jury before closing argument and deliberations.

Take the opportunity to aggressively cross examine the defense radiologist with the supporting data at deposition. Be sure to eventually pin them down to something short and conclusory: “You say x, correct? Correct. But these studies show y, correct? Correct.” This testimony is simple, and ideal for use at trial. Do not get into a drawn-out battle with the defense radiologist at trial. 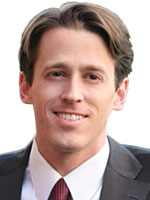 Bill Karns is a partner at Karns & Karns. He focuses on major personal injury cases. He is on the Board of Governors of the Consumer Attorneys Association of Los Angeles (CAALA) and Consumer Attorneys of California (CAOC). In 2014, he was selected as a SuperLawyer. He also received the CAALA Presidential Award of Merit and the New Lawyers Division Chair Award of Merit in 2012 from CAOC.