Authenticating Google Street View photos for use at trial

Especially valuable in premises liability to prove notice, Street View can be admitted into evidence if you follow these tips

One of the most important elements in a premises-liability case is proving notice of the dangerous condition. Most often, the plaintiff will need to establish that the defendant had constructive notice regarding the dangerous condition. As set forth in CACI 1011, one of the key questions is whether “the condition was of such a nature and existed long enough that the defendant had sufficient time to discover it.”

One important method of showing that a condition had existed for a substantial period of time is by using Google Street View. Google Street View started in 2007 and has since expanded its scope, both in terms of the quantity and quality of the images.

You probably already know how to access Google Street View, but just in case, let me give you the basics: from www.google.com/maps, enter an address. Then, to browse the Street View images, left-click on the “peg man” and drag the circle that accompanies the peg man to the area you want to view. This brings up the Street View image along with an “image capture” date on the image.

Here is an example of how Google Street View was used in a recent sidewalk trip-and-fall case our office handled: we went to Google Street View and we were able to obtain images that were captured in March, 2011, about 18 months before the subject trip-and-fall incident. The Street View photo showed that one slab of concrete had been raised compared to another slab of concrete, and that the raised portion was adjacent to a tree that was on defendant’s private property. We were then able to utilize this photograph at the deposition of defendant’s personnel and question them about the length of time the raised sidewalk condition had existed and their knowledge about the raised sidewalk.

The question then becomes how to use the Google Street View photograph at trial. (See exhibit on next page)

Request for Admission No. 1: Admit that the photograph attached hereto as Exhibit “A” is a true and correct print of an image taken in March, 2011.

Request for Admission No. 2: Admit that the photograph attached hereto as Exhibit “A” shows the condition of the location of the incident as it existed in March, 2011.

If the defendant admits these requests for admission, then you should be able to use the Google Street View photo. However, here is the response we received for both of these requests:

Defendant has no verified information establishing when the photograph was taken, who took it, at what resolution and whether or not the zoomed image provided as Exhibit 1 was computer enhanced from its original image. Defendant has insufficient information to admit or deny the request.

For the accompanying Judicial Council Form Interrogatories, No. 17.1, defendant responded:

The photo attached as Exhibit A was not taken with defendant’s knowledge and is an unsubstantiated third- party picture. Defendant has no verified information establishing when the photograph was taken, who took it, at what resolution and whether or not the zoomed image provided as Exhibit A was computer enhanced from its original image.

Thus, the two “easy” ways were foreclosed in our case.

This article will focus on what we did in order to subpoena the records from Google and to have the Street View photo identified and authenticated.

We were able to track down the correct address to serve Google’s custodian of records, which is: Google Inc., 1600 Amphitheater Parkway, Mountain View, California 94043. On the Subpoena Duces Tecum for Trial, in the section for the records to be produced, we requested the following:

For the “good cause” portion of the subpoena, we submitted the following:

This is an action arising from a trip and fall accident occurring on September 24, 2012 while plaintiff was walking on the sidewalk in front of the building located at 737 S. Genesee Avenue (and as reflected in the subject printout from Google Street View which is attached hereto as Exhibit “A” for reference).

Plaintiff is seeking to authenticate the Google Street View photograph (attached as Exhibit “A” for reference) to fully validate his contentions, and establish that the defendants had actual or constructive notice of the condition for a substantial period of time yet failed to remedy it.

Finally, for the “material to the issues” section of the subpoena, we included the following:

I am a Custodian of Records for Google, Inc. (“Google”), located in Mountain View, California. I am authorized to submit this Certificate of Authenticity on behalf of Google in response to a subpoena dated March 26, 2014 (Google Inc. Internal Reference No. 427441) in the matter of Paddor v. City of Los Angeles, et al. I have personal knowledge of the following facts and could testify competently thereto if called as a witness. The attached file(s) are true and correct copies of records pertaining to the location “737 S. Genesee Avenue, Los Angeles, CA 90036” (“Document”). Accompanying this Certificate of Authenticity as Attachment A is a list of hash values corresponding to each production file. The documents attached hereto reflect records made and retained by Google. The records were made at or near the time the data was acquired, entered, or transmitted to or from Google; the records were kept in the course of a regularly conducted activity of Google; and the making of the records were a regular practice of that activity.

Our case settled shortly before trial; however, I believe the subpoena and the response by Google would have satisfied the authenticity requirements such that the Street View photo would have been admitted.

Google has a new feature that provides Street Views at various times. When you go to Street View, Google will show you a range of photos. For instance, for the subject area in our case, there are photos from 2007, 2009, and 2011 that can be accessed through Google Street View.

If you ever have a premises liability case that involves an incident that is able to be viewed from the street, be sure to check out Google Street View for a photograph to help establish notice. With this information on how to subpoena Google to authenticate the photograph, you should be able to go a long way to establish constructive notice.

Steven Glickman is a principal in Glickman & Glickman, specializing in professional negligence, personal injury and product liability cases. He served as President of the Consumer Attorneys Association of Los Angeles in 2006. He has also been active with the Consumer Attorneys of California and was a Vice President (South) of CAOC for three years. In 1993, he and his father, David Glickman, became the first father/son members of the Los Angeles Chapter of ABOTA. Mr. Glickman was President of the Los Angeles Chapter of the American Board of Trial Advocates in 2007; he was President of CAL-ABOTA (representing the eight ABOTA Chapters in California). Mr. Glickman is a graduate of UCLA undergrad and law school. 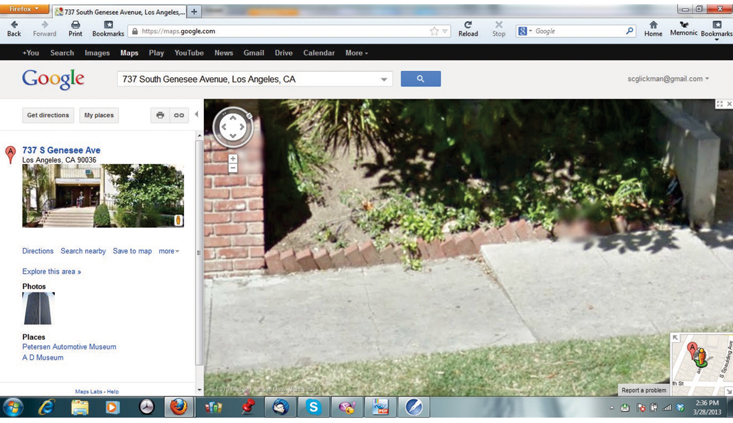