In an article I wrote last year, I urged the bar to “surprise me” with novel arguments and procedures, tactics and moves that are effective but that judges rarely see.

But many times the last thing a judge wants is to be surprised. Hence this year’s polemic: Don’t surprise me.

Don’t surprise me by waiting until the last minute, or even beyond the last minute, as in the middle of trial, to raise hard evidentiary issues. That is upsetting. If you plan to ask a question that calls for triple-level hearsay and you think it’s proper because three levels of hearsay exceptions apply, let me know about that before you call the witness. Better still, tell me about it in an in limine motion.

If you have a difficult point of law that CACI does not cover, don’t wait until mid-trial to start proposing special jury instructions. Submit them early, no later than the final status conference. Better yet, submit them via a motion for a jury instruction, filed as soon as you recognize the need for a ruling. An early ruling on a difficult legal question may expedite a settlement.

Don’t engage in ethics by ambush. Few things make a judge more nervous than that. If you run into a judge at a bar function, don’t move from pleasantries into a request for additional time to oppose a pending motion. That constitutes an ex parte communication; the judge will have to disclose it on the record; and you will look bad.

Don’t drop off gifts, and that includes gifts to our staffs. We are not allowed to accept them. After one trial, the attorneys for one of the parties sent floral arrangements (each valued at $500) to my clerk, my court attendant, and my court reporter. We were surprised, all right. We also had to spend an hour driving these items to a nearby hospital, where we gave them to the children’s ward. Then I had to write a letter to counsel (with a copy to all sides) disclosing these presents and what we had done with them.

Don’t wait until you rest before asking me to admit your exhibits into evidence. I don’t know where this practice comes from− probably criminal trials, in which counsel routinely move their exhibits into evidence right before they rest. But how many exhibits does the average criminal case contain? The gun, the knife, the photo − usually that’s all. Not so with civil cases. Even a fender bender can generate a hundred pages of medical records. Mass tort cases can involve hundreds of thousands of exhibits. No judge can wait until the end and then remember precisely who authenticated what.

You won’t surprise me with an inaccurate time estimate, but you will the jury. Jurors don’t become angry when you underestimate, they simply announce that they can’t stay and most judges will let them go.  If enough of them decamp, you just bought a mistrial. So think carefully about how long your trial will last. Way too many attorneys seriously underestimate the length of their trials. The solution? Be realistic; think carefully about the length of your examinations. Tack on a day or two to accommodate some juror’s inevitable job interview or doctor’s appointment.

And don’t forget to add time for deliberations. That usually means a day in tort cases, but larger actions require more than that. One of my trials, albeit a class action, resulted in 18 days of deliberations. The jury reached a verdict five hours before I was scheduled to start an overseas trip.

Unpleasant surprises often involve interpreters. We can find someone fluent in Spanish rather quickly, but not a person fluent in Finnish. Tell us in advance what languages you need.

Don’t surprise everybody by raising new legal issues in your reply briefs unless you have to because of what your opponent has said. Once upon a time, an insurance company moved for summary judgment against a number of class-action plaintiffs. At the same time, the plaintiffs moved to certify the class. One of the attorneys (I won’t say which) completely changed the theory of the case in a reply memorandum. Then the other attorney raised totally new points during oral argument on the second motion. Maybe I’m a slow learner, but this cascade of unexpected material confused me. It resulted in continued hearings, more briefings, and wasted time.

Closely related to this type of surprise is submitting new evidence in a reply memorandum. It’s a sure-fire way to delay your case, because the other side has the right to more than five days’ notice in order to deal with the information.

If you have a temperamental client, don’t let that person surprise me, or for that matter, everyone else in the courtroom. If you think your client may act out by yelling something or, God forbid, becoming dangerous, try to convince the person that such behavior may cause a mistrial and result in sanctions, conceivably including jail time for contempt of court. Several years ago, during the second day of the plaintiff’s closing argument in a two-month trial involving a botched joint venture, the target defendant suddenly started shouting at plaintiff’s counsel. The outburst was brief. One hard look from me stopped him. But the jury kept staring at him, glaring in fact, and nobody smiled.

If following your little talk with your client, you remain nervous about the person’s potential behavior, don’t be afraid to mention it to the judge. We will appreciate the warning so that we can take precautions such as ordering a deputy to be present in the courtroom.

Finally, be very wary of trying to surprise me (and opposing counsel) with witnesses and exhibits that you never disclosed because you are offering them for impeachment. It just may be that they do more than call into question the credibility of a witness. If so, a court may well exclude them for failure to disclose them during discovery or at the final status conference.

An example of where this problem can surface involves attempts to call undisclosed expert witnesses. In Howard Contracting, Inc. v. G.A. MacDonald Construction Co. (1998) 71 Cal.App.4th 38, 53-54, the Court of Appeal wrote the following with respect to experts called ostensibly to impeach:

Under the Code of Civil Procedure section 2034, subdivision (m), an undisclosed expert witness called for impeachment purposes is permitted to testify that a foundational fact relied upon by a prior expert is either incorrect or nonexistent. (Kennemur v. State of California, supra, 133 Cal.App.3d at p. 925.) A broad definition of “impeachment” to mean “‘To dispute, disparage, deny, or contradict’” arguably supports the City’s contention that its expert witnesses could properly testify in general rebuttal to MacDonald Construction’s case, regardless of the City’s failure to disclose the witnesses’ proposed testimony before trial. (Kennemur v. State California, supra, at p. 921, quoting Black’s Law Dict. (5th ed. 1979) p. 886.) However, under section 2034, subdivision (m), “‘calling an expert witness to express an opinion contrary to that expressed by another expert witness is not the “impeachment” contemplated by section [2034, subdivision (m)].’” (Citation omitted.)

Unless the City’s experts were prepared to challenge the accuracy of the calculations formulated by MacDonald Construction’s expert or to provide substitute figures regarding overhead and costs, their proposed testimony was improper impeachment. Expert testimony contradicting an opinion expressed by MacDonald Construction’s expert about accepted accounting practices for calculating overhead and costs falls within the category of testimony explicitly proscribed by Code of Civil Procedure section 2034, subdivision (m). Therefore, the testimony of the City’s undisclosed expert witnesses was properly excluded because it was offered as improper contrary opinion testimony, rather than for the permissible purpose of contradicting a foundational fact.

Finally, here is a little potpourri of other surprises that don’t make judges happy. So without further elaboration, I’d urge you not to:

• Surprise me with ten witnesses for an evidentiary hearing that you never asked me to schedule in connection with a motion.

• Tell opposing counsel that your next witness will be someone who you originally said would come the following day.

• Surprise everyone involved in the case by showing up late without prior notice. A few minutes can be excusable, especially because of traffic. But not twenty minutes, please.

• Frustrate everybody when your Elmo or computer or whatever device you’re using crashes. Make sure your technology works, and then test it again shortly before court convenes.

If anyone reading this recalls last year’s article about surprises, you’ll notice this piece is only half as long. That’s because you, as good counsel, don’t give the bench that many unpleasant surprises. But sometimes some of you do, and when that happens, all sorts of confusion can result. So, please, as you think of original ways to present and win your cases, devote some thought to avoiding those unexpected “Oh no” (or some other expletive) events. 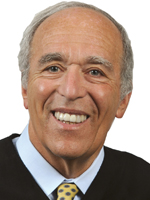 Governor Pete Wilson appointed Anthony J. Mohr to the Los Angeles Municipal Court in 1994 and elevated him to the Superior Court on December 23, 1997. For 12 years he sat in the complex litigation courts and, two years ago, took a trial courts assignment at the Stanley Mosk Courthouse. In the fall of 2009, he sat as a judge pro tem in Division 8 of the Court of Appeal, Second Appellate District. He currently is the Chair of the California Judges Association’s Committee on Judicial Ethics and is an Adjunct Professor of Law at Southwestern Law School.