The “Fastpass”: Going to the head of the line to have your motion heard without the usual 16 court-days notice

Each morning in my Los Angeles County “Personal Injury Court” I receive an unpredictable number of ex parte applications filed that day in the approximately 6,600 pretrial cases I have pending. The four PI Courts in the downtown Stanley Mosk Courthouse handle proceedings in the auto accident, slip-and-fall, medical malpractice, products liability, and assault cases filed in our county. The PI Courts handle a high volume of pretrial motions, discovery conferences, and final status conferences, although when cases appear ready for trial, we send them out to be tried by other judges.

On a particular morning, as few as one or two ex partes may come my way, or as many as seven or eight. Below, I will tell you something about how I approach them. While some of my views may be particular to the high-volume PI Courts, or may reflect simply my perspective, much of what I say may be useful to attorneys who litigate these applications in any California court.

The term “ex parte,” while familiar, actually is not an accurate name for these applications. Latin for “from one party,” ex parte applications nevertheless require notice to the opposition (though not as formal as motion notice), are often opposed, and frequently prompt a court appearance by both parties. Noticed motions, of course, are also filed by one party, and it is not unusual for noticed motions to be unopposed or for only one side to appear.

So it is not “one-sidedness” that distinguishes ex partes. Instead, what really distinguishes ex parte applications from noticed motions is that they permit drastically shortened notice. A typical motion in California requires at least 16 court days notice per Code of Civil Procedure section 1005. In the PI Courts and in many of our overburdened civil courts, the first available motion hearing on the court’s calendar is far further away than those 16 days. In dramatic contrast, an ex parte application merely requires notice by 10 a.m. the day before the application is presented directly to the court, per California Rules of Court, rule 3.1203(a).

I thus look at ex parte applications kind of like a Disneyland “Fastpass” that lets a party speed to the front of the normally long line to have a motion heard, and at the same time denies the opposing party the usual time to muster an opposition. For a litigant to get such priority, as explained below, the law requires a convincing reason that a normal noticed motion will not do. This special “Fastpass” character drives the way I approach these applications.

Oral argument: the lack thereof, and the filings

Due to the high volume in my PI Court, I currently decide ex partes in chambers. If the opposing party arrives for the hearing without a written opposition, that is understandable, as the party may have received notice only the previous day. An opposing attorney in this position should ask my clerk for a few minutes to handwrite a short statement of opposition, which we will file. This will provide some record of the opposition.

In nearly every case, this is all I need. A party’s brief statement typically is sufficient for me to make a sound decision.

The fact that such a short statement of opposition is adequate should also serve as a clue to the applicant. Rarely should an applicant need more than about five pages to make its argument. Attorneys sometimes seem to feel that more explanation is needed for the judge to “get it,” but, if anything, the opposite is true. Attorneys should be concise and use clear point headings to ensure that the key important information is readily accessible to a judge handling a high volume of material every morning. No law clerk reviews ex parte applications, only I do, and I typically have several other applications and multiple court calendars each morning. In my view, an attorney who includes voluminous detail usually faces more risk of burying her most salient points than of convincing the judge with the additional material.

Given these requirements, even if notice is also given by other means, my view is that the ideal practice is to include with the declaration a copy of a time-stamped email sent to the opposing party, so I can see precisely what notice was given and when. An opposing party could efficiently provide its position by providing a substantive response to the email and asking the moving party to attach it to the application. While in some instances judges frown upon parties attaching their correspondence, this is not such a situation. An email chain that contains a response from the opposing party enables me to see whether (or to what extent) the application is opposed and the basis for the opposition, even where time does not permit a formal written opposition.

Because a party filing an ex parte application is asserting that a normal noticed motion is inadequate, the second thing I do is consider whether there’s a proper showing of an urgency that justifies ex parte relief.

Indeed, the ex parte rules require a declaration that explains why the applicant is seeking emergency relief. (Cal. Rules of Court, rule 3.1201(2), 3.1202(c).) The standard is quite high: the applicant must show that the party faces “irreparable harm” or “immediate danger” if relief is not granted (or a “statutory basis for granting relief ex parte.”) (Cal. Rules of Court, rule 3.1202(c).)

Commonly in the congested PI Courts, ex parte applicants seek to shorten time on noticed motions because the party cannot schedule a noticed motion sufficiently before the trial date. In the PI Courts, parties reserve hearing dates for noticed motions on the Court Reservation System (CRS), available through the Court’s Website, and each PI Court has a finite number of spots for various categories of motions each day, which means that a hearing date for some motions may be several months away. The PI Courts’ Fourth Amended General Order informs attorneys that judges will not shorten time:

“The PI Courts have no capacity . . . to shorten time to add hearings to their fully booked motion calendars. The PI Courts do not regard the Court’s unavailability for timely motion hearings as an ‘immediate danger’ or threat of ‘irreparable harm’ justifying ex parte relief.” The Order advises parties to reserve the earliest available motion date and then stipulate to continue the trial date.

Consistent with this General Order, when I receive a request to shorten time on an important motion due to the impending trial date, I typically simply order the trial continued until sufficiently after the motion hearing, rather than shortening time on the motion.

As to other opposed applications, I will not grant relief if the applicant cannot show a level of harm justifying a “Fastpass.” Absent the requisite showing of an emergency, the opposing party deserves the time to draft a response normally provided for noticed motions. Because of the importance of this requirement, an applicant should explain the need for expedited relief prominently at the beginning of motion.

Ultimately critical to how I rule on an ex parte application is the particular relief sought. Attorneys should carefully consider whether ex parte relief is even potentially proper for their application. The most convincing cases for ex parte relief can be made where (1) the substantive rights of the opposing party will not be affected, (2) the request is simply for the status quo to be maintained until a noticed motion can be heard, or (3) a statute authorizes ex parte relief for the matter.

First, if the substantive rights of the opposing party will be affected, the moving party generally must proceed by noticed motion rather than ex parte. (St. Paul Fire & Marine Ins. Co. v. Superior Court (1985)156 Cal.App.3d 82, 85 [relief that affects rights of opposing party generally must be by noticed motion, and statutes that are silent as to ex parte notice should not be construed to authorize relief by ex parte application].)

Consequently, assuming a proper showing, I may grant ex parte relief that does not affect the substantive rights of the opposing party, for example: continuing a trial; allowing the association of pro hac vice counsel; correcting a clerical error; expanding the time for, or approving a manner of, service of process; authorizing a “Doe” amendment; dismissing a defendant; approving of a stipulation; or granting an extension or shortening of time for discovery.

Second, as a specific application of that principle, an applicant needing emergency relief that does affect the substantive rights of an opposing party will find it more difficult to convince me to grant the relief outright than to convince me to issue an order that preserves the status quo (or otherwise prevents the harm temporarily) until a noticed motion can be heard. If I simply preserve the status quo, I usually am not affecting the substantive rights of the opposing party. For instance, when I receive an opposed ex parte application to set aside a default judgment, I often am inclined to conclude that the opposing party deserves time for the response that would be allowed if a noticed motion were brought under Section 473 of the Code of Civil Procedure. Yet I might more readily be convinced to act ex parte to stay enforcement of a default judgment, preserving the status quo until the defendant’s noticed motion to set it aside will be heard.

Apart from these three categories, I am reluctant to grant ex parte relief without allowing the opposition its right to be heard on statutory notice. For instance, I regularly receive ex parte requests seeking discovery sanctions, yet those requests are, frankly, dead on arrival. (See Sole Energy Co. v. Hodges (2008) 128 Cal.App.4th 199, 208 [“Discovery sanctions may not be ordered ex parte, and an order purporting to do so is void.”].)

Finally, in order to have the best chance at success, I recommend that the applicant submit a proposed order with the ex parte application. This is helpful for two reasons. First, it helps the applicant ensure that it will get the precise relief it wants, should I agree to grant the application. Secondly, it aids in my review process; I often turn to the proposed order for a succinct statement of the precise relief wants from me that day.

I recognize the great importance of many ex parte applications to the litigants, and, even with limited time, I attempt to provide sufficient explanation of why I have granted or denied each one. I hope that this article also provided some helpful explanation as to how I, and perhaps other bench officers, approach the task. 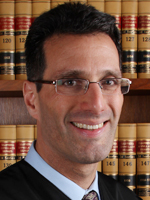 Judge Michael J. Raphael was appointed to Los Angeles Superior Court in 2011. Prior to his appointment, Judge Raphael was an Assistant United States Attorney in Los Angeles for over twelve years, serving as Chief of the Appeals Section during his last five years. As an attorney, Judge Raphael orally argued over forty cases in the Ninth Circuit Court of Appeals, and he received an Attorney General’s award for his work as special prosecutor in the leak of grand jury testimony from athletes in the BALCO case. He has taught criminal law and advocacy courses at USC’s Gould School of Law and George Washington University’s law school. Judge Raphael worked as counsel in the U.S. House of Representatives, for the law firm Sidley Austin LLP, and as a law clerk to a federal appellate judge. Judge Raphael graduated from Yale Law School.