Placing a dollar value on an exertional-exercise disability

Cardio exercise has an inherent value to a person’s mind-body well-being. However, those who incur permanent injuries often suffer an impaired functional capacity that prevents their participation in exertional activities. The American Medical Association defines this type of disability as involving “activity limitations and/or participation restrictions.”

This article offers a quantifiable methodology, based on U.S. Department of Labor statistics, for placing a dollar estimate on an exertional-exercise disability. This valuation methodology has repeatedly been accepted by juries who have gone on to make awards.

How important is exercise to the human body?

Dr. Henry Lodge, M.D., reported that both light and energetic aerobics are the master controllers for the physical and chemical rhythms that work throughout our bodies, including our basic brain patterns of behavior and mood, thoughts, energy, digestion, immune function and muscle metabolism (Lodge, 2007). Dr. Lodge indicated that arteries are designed to dilate throughout the body, forcing oxygen-rich blood deep into muscle fibers, sending forth the chemical signals that bring our bodies to life. Exercise causes the body and mind to repair and sustain itself through its metabolic function.

Dr. Lodge reported that the body’s carefully choreographed chemical dance within the bloodstream regulates literally dozens of body-brain signals including growth hormones, testosterone, insulin, adrenaline, serotonin, etc. Conversely, immobilization and inactivity lead to chronic inflammation, and generalized physical and mental deterioration. He stated the habit and routine of exercise need to be thought of as a job, because one either exercises, or their body and mind ages (p. 111). Dr. Lodge stated, we “can’t afford not to exercise” (p. 112).

Not only is exercise invaluable for its physical attributes (i.e., muscle tone, circulatory system, decreased heart disease, obesity, etc.), but there are significant mental benefits. Six meta-analysis studies (5 to 159 individual studies surveyed) have been performed that examine the relationship between exercise and anxiety reduction. (Calfas & Taylor, 1994; Kugler, Seelback, & Krüskemper, 1994; Landers & Petruzzello, 1994; Long & van Stavel, 1995; McDonald & Hodgdon, 1991; Petruzzello, Landers, Hatfield, Kubitz, & Salazar, 1991.) Across all studies examined, exercise that is “aerobic” was significantly related to reductions in anxiety. Exercise is also a positive treatment for depression to the point that it is considered a viable adjunct or alternative to many of the more traditional therapies. In addition, four meta-analyses (10 to 51 studies) found that physical activity/exercise brought about statistically significant increases in self-esteem. (Calfas & Taylor, 1994; Gruber, 1986; McDonald & Hodgdon, 1991; Spence, Poon, & Dyck, 1997.) Two meta-analyses showed that subjects who engage in aerobic exercise go to sleep more quickly, sleep longer, and have more restful sleep than subjects who did not exercise. (Kubitz, Landers, Petruzzello, & Han, 1996; O’Connor & Youngstedt, 1995.)

Thus, exercise regulates blood pressure, bone density, muscle tone, and the natural production of endorphins that function as pain killers and mood stabilizers. By not being able to exercise, peak bone mass, lung function, blood flow efficiency, and new brain cell development, are all compromised. Protracted inactivity detrimentally impacts production of glucose, insulin, and leptin levels, which in turn leaves one susceptible to chronic disease and conditions, and age-related decline. Therefore, permanent injuries that prevent exertional activity impact overall physicality, both of the mind and body.

In fact, a 1978 Harvard University study reported that regular exercise gives back two hours of life expectancy for each hour of exercise; that for a 43-year-old man equates to three years. A 2015 Copenhagen City Heart Study triples that figure, reporting, “People who are physically active have at least a 30 percent lower risk of death during follow-up compared with those who are inactive” (Dose of Jogging and Long-Term Mortality, Feb, 2015). Dr. J. Michael McGinnis of the Office of Disease Prevention and Health Promotion (U.S. Department of Health and Human Services) concurs, stating that regular physical activity reduces overall mortality by more than twenty-five percent, or 9 years for a 43-year old.

How is reliability established?

The U.S. Department of Labor has provided two essential components necessary to establish a foundation of reliability. First, the Federal Labor Standards Act puts forth the requirement that workers who work 40 hours per week need to be paid time-and-a-half for any additional overtime hours. This inherently draws a correlation between an injured worker’s wage rate and their valued off-work time. In other words, a worker who chooses to exercise, and thus forego overtime hourly work, is implicitly placing a value of time-and-a-half on their exertional-exercise activities.

Active leisure is a subset of leisure time. It may be described as the non-income producing time… Participation in these activities may result in a loss of potential income. This income would have been earned had the worker chosen market work rather than the non-income producing activity. By estimating the foregone income, a value may be derived for that activity. This use of opportunity cost pricing provides a value of the active leisure that is the marginal wage rate for the worker.

A disabling injury may remove the opportunity for making a choice between income and (active) leisure… For many injured, their active leisure loss is total, for others partial…

Secondly, the U.S. Department of Labor in its annual publication, American Time Use Survey, provides the needed statistical time durations for how long participating men and women exercise. For example, men who participate in “sports, exercise and exertional recreation” do so for 1.9 hours, versus women at 1.3 hours, per Table A-1 (2010, Time Spent in Detailed Primary Activities by Sex). Thus, based on the injured person’s pre-injury actual or reasonably anticipated participation, a conservative estimate of their average weekly exercise can be validated per the U.S. Department of Labor. Needham and Shipp similarly assert that “Pre-injury active leisure hours become the basis for active leisure losses to be calculated for the injured worker.” (Id. at p. 76.)

Consistent with Daubert’s “reliability and relevance” criteria, an exertional-exercise disability assessment is within the purview of the rehabilitation specialist’s “technical and other specialized knowledge.” Just as vocational evaluations rely on human fact-finding to perform labor market surveys, job analyses, rehabilitation plans, household service calculations and the like, this assessment draws on specialized knowledge to correlate an injured person’s reduced functional capacity to their loss of exertional-exercise ability.

In establishing an injured person’s disability status, a detailed inventory of their pre-injury exertional-exercise activities is ascertained, including type, frequency, duration and intensity. For example, Tom, age 43, worked out at the gym three times per week, year-round. As part of his workouts, he engaged in aerobic type exercise (treadmill, stair climber, elliptical trainer, etc.), for one hour and free weights for 45 minutes. He also went hiking, bike riding, beach walking, dancing, or golfing approximately once per week.

After completing the exertional-exercise inventory, the treating physician is contacted to assess the person’s functional capacity limitations (lifting, carrying, standing, walking, running, bending, stooping, etc.), along with any restrictions to sedentary, light-type work activities. During this physician consult, specific inquiry is made concerning the injured person’s residual exercise disability status. The following functional disability rating scale can be presented to the physician:

Having established the injured person’s reduced functional capacity, including the severity of their exertional- exercise disability, a workable methodology can now be applied.

Ms. Laura Wronski, researcher for the American Time Use Survey (ATUS), provided the participation figures for the Average Hours per Day by Detailed Activity and Age, 2012 Annual Averages. Please note the following:

These data points provide age-specific participation rates for the noted age ranges. In speaking with Ms. Wronski, she reported that the participation figures for “Sports, Exercise and Recreation” would be appropriately multiplied by the number of times per week that a person engaged in exertional activities. The ATUS data provides statistically valid, standard deviation derived, figures that meet the Daubert reliability test, exhibiting standard error of the estimates.

Moreover, note that the ATUS data reflects exercise levels to age 74 and beyond. Based on an expert’s clinical judgment, projected EED losses might reflect a diminished participation rate over time.

The question is also raised as to whether an individualized wage rate should be applied, as opposed to a generalized cross-sectional wage rate. For example, the argument can be made that a businessman’s exertional exercise might unfairly be assessed at several times the value of a laborer’s exercise, when intrinsically, both end up doing the same push-ups or sit-ups. In contrast, the contention might reasonably be made that a billionaire’s off-work hours might have a much higher opportunity cost quotient, despite both parties paying the same price for a hamburger, movie, etc. This article does not weigh in on the expert’s clinical judgment in choosing an overtime or straight-time wage rate, nor whether they apply an actual wage rate versus an average for all workers, since strong arguments can be made for each. If the most minimal approach is utilized, the weighted average wage rate for all workers in a particular geographical area might be employed. In Los Angeles, the average worker is paid $25.48 per hour (Occupational Employment Wage Survey: 4.056 million workers, 2014).

Given the ATUS exertional-exercise participation figures, a conservative valuation can be calculated. Tom worked out three to four times per week for 5.64 to 7.52 hours per week (ATUS, avg. 6.59 hrs/wk). Post-injury, he is chiefly inactive and limited to strolling with his dog and stretching. This is consistent with his 51 to 75 percent severe disability loss of 6.59 hours per week of exertional-exercise participation. Thus, if just the average straight-time wage rate at $25.48 per hour is applied, times 6.59 hours per week from age 45 to 54, his annual loss would equate to $8,731. By projecting the above statistics to just age 70, Tom’s EED loss is inherently present valued at $204,648, and at the time-and-a-half wage rate, $301,421.

The U.S. Department of Labor in its Federal Labor Standards Act, and American Time Use Survey, provide the needed foundation for assessing an injured person’s exertional-exercise disability. That such an assessment is warranted is self-evident given the body-mind physicality implications associated with exercising or not exercising, including a reduced potential life expectancy of 30 percent. This consultant has testified repeatedly to this damage component in Superior Court. Triers-of-fact have in each instance accepted the veracity of the EED assessments, which are physician supported, allowing the testimony before juries, with awards granted. 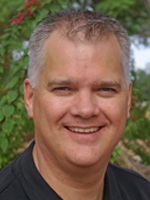 David Orlowski DMIN CRE has worked as a vocational economic consultant for 27 years. He has previously served as President of the American Rehabilitation Economics Association. Dworlowski@aol.com 602.549.0979 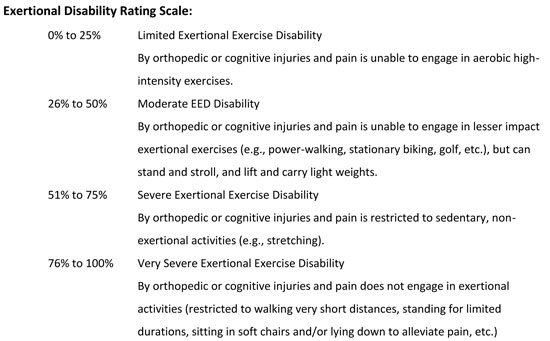 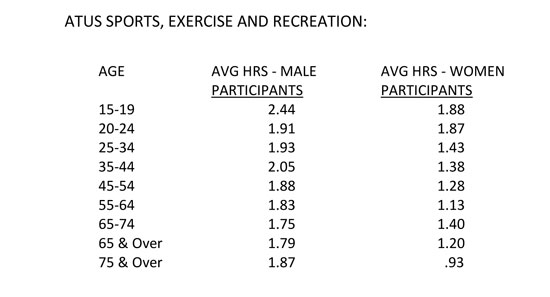 USA Today, Research Fleshes Out the Benefits of Exercise, 10/23/07.