I was asked to participate with my friend Michael Schonbuch, the leader of the Association of Southern California Defense Counsel, in an event at Pepperdine University School of Law for ABOTA, discussing civility. The opportunity was fantastic, having a dialogue with about 200 first-year law students, teaching them the core values of civility trial lawyers should have. When we finished the students stood and cheered, a humbling experience. There is a powerful reason why.

We consider ourselves “warriors,” fighting the good fight, champions of, and trial lawyers for, the people. In some ways this is often reduced to good vs. evil, the fight for justice against those who would put out that flame. But things, like life, aren’t so simple. Spend some time with a great trial lawyer who fights for the defense, talk with them, listen, and you’ll learn that not only is it not so simple, that analysis is just plain wrong.

It is true that as a general rule we see that multinational corporations, institutions of insurance, and many govern-mental entities can be heartless and obstructionist in their conduct after an injury-producing incident. But that is not at the direction of the defense trial lawyers. And listen to defense trial lawyers some more, and you may learn that they too believe that theirs is a righteous cause, a cause they fight to keep businesses going, ideas and research flowing, that they perceive themselves, also, as a bulwark to preserve America and what it stands for. They believe theirs is a patriotic mission, and amongst defense counsel there is as much suspicion of us as we may have for them.

Civility is the key to building a bridge of dialogue between us. It is to the benefit of those we serve in our practices. Not a sign of weakness.

Recently there was great discussion, a healthy dialogue, amongst our members about the welcoming of our friends in the defense bar to the CAALA Las Vegas convention. Many agreed that we benefit from holding our doors open, not simply to generate money for our organization, but for larger goals of fostering dialogue and good relationships in a pleasant setting of education. Others were concerned that we were allowing “the enemy” to gain access to our strategies and secrets, again analogizing our mission to warlike themes, viewing such an open convention as harmful and in need of change. The reality is, though, by building bridges rather than walls, we gain much. Because we are welcoming and strong, and fun to be with, this year over 3,000 people came to be a part of CAALA Vegas. In every way, it was the best legal convention ever. Our friends at CAOC and AAJ agreed.

There is a time and a place for “members-only” events which we hold on a regular basis throughout the year, to honestly and privately share opinions and techniques, whether it be effective cross-examination ideas, or what our members have learned about experts, judges, mediators and trends in our practices. We can and should do both. We can and should work together, with our defense brethren, for the greater good. As the British philosopher Julian Baggini said, “True respect means taking other people’s beliefs seriously and assuming they are adult and intelligent enough to be able to cope with it if you tell them, clearly and civilly, why you think they are totally, utterly and disastrously wrong.”

We do not have to pretend that we do not have deep differences in opinion with many defense lawyers, judges and others who are not overtly aligned with our mission for justice. We can have our differences, but we can still show respect and consistently take the high road. As Mike and I emphasized to the law students, ours is a very noble and honorable profession. ABOTA was formed in Los Angeles, and spread across America, to show that we can be zealous advocates for those we fight for and protect, and still retain our dignity. We can be passionate without being obnoxious. We can listen better and learn much in the process. The best lawyers among us show these qualities all the time. The most complimentary and civil lawyer I ever met was Charlie O’Reilly, yet he was the most effective lawyer any plaintiff could dream of. A former Marine (if there is such a thing), Charlie was the first to acknowledge that trial is war, but he was insistent upon showing civility.

When I asked the law students to answer the question, “Who was the greatest trial lawyer of our time?” many yelled out the same answer, Johnnie Cochran. I responded to them that this was probably true, that Johnnie was a historic example of an accomplished and uniquely talented trial lawyer, but I reminded them that it was his civility that was central to his conduct, which allowed him to be both tenacious in the courtroom yet charming and welcoming outside the buildings. This was the type of character we should emulate.

We can learn much from the best in our profession. Watch them, listen to them, observe how their opponents respect and embrace them. There is no doubt that we must continue our mission to empower plaintiff attorneys to achieve justice, but at the same time, we need to retain our capacity to empower our fellow plaintiff attorneys to act with civility in our conduct. People notice politeness and honesty in our behavior, and such strength creates the needed environment to teach, to learn, and bring about change. We can change the world, but we will best do so with a civil tone. 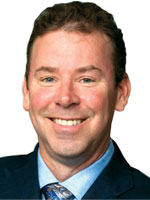 Joseph M. Barrett served as 2015 President of the Consumer Attorneys Association of Los Angeles. He is a partner at Layfield & Barrett specializing in major, complex cases concerning catastrophic injury or death and impact litigation across the diverse fields of tort law including civil rights, insurance bad faith, product liability, professional negligence, vehicle and premises liability and road design. Mr. Barrett served the Consumer Attorneys Association of Los Angeles (CAALA) as the President in 2015 and is a member and supporter of the American Association for Justice.