The phrase “Following in my Dad’s Footsteps” took on a special and ironic meaning for me recently. This idiom generally means to carry on the work, behavior or tradition of one’s father. Two weeks ago, I attended the deposition of my expert who happens to be one of the leading amputation orthopedic surgeons in the country. The deposition took place in Seattle, Washington, which happens to be where I grew up so it was a good time to visit with family as well.

I happen to be representing a client that needs to have his leg amputated following a motorcycle accident. It is a very tragic situation for him, his wife, and two young daughters. The irony to all of this came to light when it occurred to me that my dad represented a young lady in Seattle nearly 40 years ago that had her leg amputated following an accident in which her leg was blown off from a cannon being used during Seattle’s first-ever Bastille Day parade. The case for me became known as the “Ms. Shelly case” as that is how I was introduced to her when I met her at the age of eight. The case resolved and there was a celebration of the settlement at her home with our family invited. It just so happens that her leg was amputated by the head trauma surgeon at Harbor View Medical Center 40 years ago and ironically my expert is now the head trauma surgeon at the very same hospital.

As trial lawyers, it has also occurred to me that we are also constantly following in someone’s footsteps in the work we do. In order to take on these David v. Goliath battles against insurance companies and large defense firms in order to arrive at justice for our clients, we are constantly learning from those seasoned trial lawyers who have come before us leading the path. From the likes of San Francisco’s “King of Torts”, Melvin Belli, and Gerry Spence with his Trial Lawyer’s College in Wyoming, to the many veterans among us including Tom Girardi and Browne Greene in Los Angeles and Mark Robinson and Wylie Aitken in Orange County to name just a few. These leaders and champions of justice have been the true trailblazers for many of us that are now following in these seasoned trial lawyer’s footsteps with much success.

And it goes without saying that much of the success we, as trial lawyers, have received for our clients could not have happened without the benefit of organizations such as our state organization, CAOC, as well as our local TLAs including CAALA and OCTLA. These sister organizations essentially allow our members to find the footsteps we need to follow and the paths we need to take and, frankly, the paths we should not take. We share information in many ways –  with listservs and forums, monthly seminars, and conferences including CAALA Vegas.

At OCTLA, we were able to share the wisdom of three former Judicial Officers in our September Program entitled “Tips from the Bench” with retired Judges David Velasquez (Judicate West), Francisco Firmat (ADR) and Nancy Wieben Stock (JAMS). We are also looking forward to our Columbus Day Bench and Bar Golf Tournament at El Niguel Country Club on October 12 with a first-ever Cuban theme to include Fedoras, Cuban cigars from a professional cigar roller and a Cuba Libre hosted bar.

And then our signature event of the year, the OCTLA Top Gun Awards, will be held at the Fairmont Hotel in Newport Beach on Saturday, November 21. We will be honoring Top Gun award winners including Greg Rizio (Personal Injury), Richard Donahoo (Government Liability), Jerry Gans (Medical Malpractice), Anne Andrews (Distinguished Achievement/Landmark Settlement) and CAALA Board Member Jeffrey Greenman (Young Gun).

We will be raising money for our charity, Miracles for Kids (www.miraclesforkids.org), which assists families in need who have children that have been diagnosed with a life-threatening illness. We are excited to have selected this charity and are currently accepting silent and live auction donations. Please contact Executive Director Janet Thornton (www.octla.org) if you would like to make a donation; donation forms can also be found directly on our website.

We are all following in someone’s footsteps in our journey as trial lawyers. Whether it be a family member, mentor or members of our trial lawyer’s organizations, we are all doing rewarding and deserving work for our clients. The footsteps we follow have made us all better for the work we do. 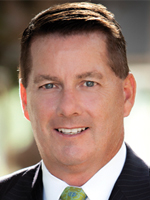 Ted Wacker has been a trial attorney involved in litigating cases for nearly 25 years and past President of the Orange County Trial Lawyers’ Association (OCTLA). He specializes in catastrophic injury cases including individual personal injury cases involving accidents, medical malpractice, elder abuse as well as mass tort pharmaceutical and medical device cases. Mr. Wacker was selected as a California Super Lawyer for 2013-2017.