Lessons learned from my first trial

There is nothing as scary, and as exhilarating, as trying your first case

Life holds certain moments that amaze and astound. Maybe for you it was the day you passed the bar, or the day you became a mom (or dad), or even the day you ran your first marathon. For me, the day I started my first trial is right up there in that list. I had just graduated from CAALA’s Plaintiff Trial Academy and was itching to try a case. At the Academy, CAALA “masters” gave us raw, in-depth instruction on every aspect of trial – how to organize an Opening Statement, how to use themes, how to cross examine experts effectively, and how to get the jury to relate to you. It was eight weeks of intense education, demonstration and “learning by doing.” But most importantly, it gave me the confidence and courage to say, “Damn it, I’m going to try this case.” So off to trial I went on August 31, 2015. I gave my very first Opening Statement on the 11th anniversary of my Dad’s passing – a sign from the man who wanted more than anything to watch his little girl grow up to be a trial attorney.

Things were so different than I had imagined. I was nervous, but calm. Scared, but ready. And as prepared as I was, things would come up once in a while that left me feeling like “hmm.... should I have done that differently?” Here’s the thing about trial that no one teaches you: When you walk into that courtroom, everything else stops, time stands still. You become a gladiator, ready to take on whatever stands in your way, and the only person you’re doing it for is the person that hired you two years ago to fight a battle he can’t fight himself. Of course you’re nervous about missing an objection, or forgetting to ask for permission to approach the witness, or putting a document on the Elmo without laying proper foundation, but it’s OK. It’s fixable. And once you mess up, you never make that mistake again.

My client Danny was a passenger on an MTA bus. Defendant made a left turn in front of the bus, on a green light, causing a collision. The defense hired their regular slew of experts to claim that this was a “minor impact” and that Danny’s injuries were pre-existing and not caused by the crash. They also claimed that the bus driver was partially at fault. They basically threw everything against the wall, hoping some of it would stick. So here I am, fighting liability and damages. It was daunting for sure. But I felt amazing. I was Spartacus!

During voir dire, I tried hard to be myself and keep it real. I was so afraid that none of the prospective jurors would talk, but within minutes, they were raising their hands, joining the discussion and engaging in the process. After voir dire, I looked at my jury and thought, “These folks are OK. These are the people that are going to help me win.”

Little did I know that I was very, very wrong.

After opening, I sat down, pleased with myself. I had nailed it. Then I destroyed the Defendant on 776, caught her in lies, made her look stupid, and reminded the jury that we were there because this one person just wouldn’t step up to the plate. Danny and his boss told a compelling story about how this crash had affected Danny’s life, how things were different for him now, and how uncertain the future was. My experts were equally effective, explaining complex medical terms to the jury, demonstrating what an epidural injection looks like, using the magic words for “reasonable and necessary.”

At the close of my case in chief, when I uttered those magical words – “Plaintiff rests, Your Honor” – I felt exhilarated, confident. Then came the defense experts, and it was magic!! Crossing the infamous Dr. Wilson was my movie moment. By the time of my closing argument, I was super comfortable up there. Funny how in a few days, from opening to closing, my style totally changed. I knew my stuff and I wasn’t afraid to go all in and ask for every single penny I thought Danny deserved.

After the judge read final jury instructions, and the jury at last left to begin deliberating, I took a long deep breath, looked around the empty courtroom and knew I had crossed that finish line. And for the first time in a week, I felt drained − emotionally and physically. I knew I had done my very best, and I was sure the jury got it. But not less than 72 minutes later, I got a call from the clerk – “Jury’s reached a verdict.” My heart sank. I was no seasoned trial lawyer, but even I knew this didn’t bode well for my client. As the verdict was read, I felt sadder and more defeated with each passing second. I had “won,” but not really. The jury came back with meager damages. They just didn’t buy the concept that Danny would need future surgery. They didn’t give him a cent to pay for that or for future pain and suffering.

I was down. Like really down. I felt betrayed by these folks who seemed so nice, so engaged and in whom I placed my trust. I felt cheated. On top of that, no sooner than the verdict was read, I got a text from my family pediatrician that my two-year-old son was being admitted into the ER. Trial lawyer hat off, mommy mode on. All of a sudden, the trial and its painful result vanished from my mind. On the drive to the hospital, I just kept thinking about my baby, wondering if he would be OK. And all the while, feeling guilty that, at that moment, nothing mattered more than him; not the case, not the trial, not the loss.

That is probably the most profound lesson I learned throughout the trial − yes, we are gladiators, yes, we fight for a living, but we are human. We have families, we make mistakes, we get overly emotional. But that’s what makes us better trial lawyers. Because no one can relate to a robot. It’s OK to be vulnerable, to admit that you don’t know something. It’s OK to look at your loss and say “I still fought.” And it’s OK to still think you did the best you could.

Sure enough, I knew my Opening. In fact, I did it better than the first time around. Yes, I forgot to say some things but no one knew that except me. The connection was so much stronger, the emotions were more authentic and it definitely wasn’t as sing-songy. So at trial, I left my notes on the podium, walked up to the jury, and went back to the podium only when I needed to. By the time closing came around, I didn’t have any notes since most of it was in my PowerPoint anyway.

Sure I prepped him in my office, and we went over the questions I would ask him and what he would be cross-examined on, but I didn’t really get to know him until trial actually started. Looking back, I understand now that a meeting in an office with your client and his wife is not the best way to get the real story out. Our offices are sterile; the client’s probably nervous about trial. As much as I thought I had broken through some of his barriers, I wish I had done more. Next time around, I plan on meeting my client and his family at his home, on their turf, in their reality.

For about two days after trial ended, I was fairly devastated and depressed. I felt cheated. And after licking my wounds, I realized I didn’t have time to sulk. I had another case coming up for trial – a more difficult case, with bigger disputes and an out-of-state client. The fight is never over. But the cause we take up for our clients is never greater. What we do is important, and I am so proud that I can now truly call myself, a trial lawyer. 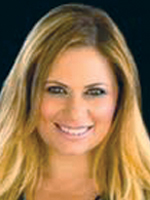 Aslin Tutuyan is a Senior Associate at The Mandell Law Firm in Woodland Hills where her practice focuses on automobile collisions, premises liability and other personal-injury matters. She joined the firm in 2008 and is a graduate of Southwestern Law School. She is an August 2011 graduate of the 25th Annual ABOTA Trial School and a graduate of CAALA’s Plaintiff Trial Academy (2015). In 2015, she was selected as one of Southern California Super Lawyer Rising Stars.