Last month, my Neptune washing machine broke down. It had been humming along beautifully, binging and beeping as it churned out loads of sparkly clean clothing, until that ominous night… when it went dark. The once bright display was empty, the towels inside submerged in enough stagnant water to fill a wading pool, and it was completely nonresponsive to my home repair attempts. Seeing as I score a negative number on the technical aptitude scale, this was not surprising. Yep, it was time to call a professional.

I looked online and identified washing machine repairmen in my area and selected the one that could make the soonest house-call. As my two children apparently feel they need to use enough towels each day to cover the Matterhorn at Disneyland, time was of the essence.

The washing machine repairman arrived and, after much futzing about with tools, stated that there was an electrical problem, he needed to order a new part, and would “return soon.” I quickly learned we had vastly different understandings of the word “soon.” Days felt like years as the clothing and towels piled up, and I felt as if I was back at UCSD where each family visit included a few loads of laundry. After nearly a week, he returned and “repaired” my machine. I soon learned we also had vastly different understandings of the word “repair” because, the very next day, my washing machine again entered the Dead-Zone.

“What happened?” I asked.

He proceeded to launch into a lengthy and confusing monologue about technical aspects of the repair and how “this sometimes happens with new parts,” and that he would order yet another part and return “soon.”

He ignored my calls asking for an ETA and my requests that the part be expedited. Our household was literally bursting at the seams with laundry by the time he returned to fix the washer a week later. I was frustrated, to say the least, but was relieved when he left that day as my washer was again working….

The next day… AGAIN…DEAD ZONE! OK… now I was not happy. What was going on here?! I called and again got the run around, this time with rude comments woven in with his “technical” explanation and unsolicited commentary about this being a “new part.” I may not be very technical… but after this call, I could say with absolute certainty, this was no new part.

I felt duped and distrustful of the entire washer-repair industry. Yet, my machine was still broken and I needed a solution. I recounted my story to a contractor friend. Although he didn’t know any washer repairmen in my neighborhood, he referred me to a friend of his that was in the washing-machine repair business elsewhere.

This professional stood nothing to gain from aiding me; he was not in my area and had no ability to make the repair himself. Yet, he spent an hour on the phone helping me. He asked if my Neptune was under warranty…and walked me through the process to make this determination (this was not something the first repairman had ever mentioned). When it was determined my machine was still under warranty, but for only two more weeks(!!!), he helped me locate a repairman in my area to do the warranty work, and even conference-called them with me to be sure the repair would occur before the warranty expired. He was kind, helpful and professional; in one hour’s time, he re-instilled my faith in the washing-machine repair industry.

As a trial lawyer, I am all too familiar with people having a negative perception of our industry. They have one bad experience, or hear one bad story, or absorb one too many smear-campaigns attacking our profession and their perception becomes skewed. They become distrustful of us all. What this washing-machine incident taught me, however, was that it just takes one good experience to change people’s perception.

In the words of Gustave Flaubert, “(t)here is no truth, there is only perception.” Studies have shown that 90 percent of error in thinking is due to error in perception. If you can change your perception, you can change your emotion and this can lead to new ideas. (Edward deBono.) It is NEVER too late; every day we have the opportunity to change peoples’ perceptions. A good deed, a nudge in the right direction, an hour spent selflessly aiding someone in need … all these things help shape our future and the future of our noble profession. 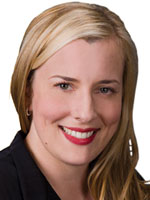 Shaina Colover is 2017 President of the Orange County Trial Lawyers Association and practices personal injury law with her dad at The Law Offices of Ronald B. Schwartz, upstairs from Muldoon’s Irish Pub in Newport Beach. She serves on the CAOC Diversity Committee and is former chair of the OCBA and OCTLA education committees.