MRI of the upper cervical spine

MRI of the Cranio-Vertebral Junction: A valuable tool to evaluate “whiplash”

Motor-vehicle accidents often produce forceful back-and-forth displacement (whiplash) of the head on the neck. When the head moves backward, the ligaments in the front of the cervical spine are stretched and the bones and joints in the back of the neck are compressed. Forceful forward movement of the head compresses the discs and may produce considerable pain and instability. Plain cervical radiographs are usually normal following whiplash injury. The injuries are identified using MRI techniques specifically designed for the evaluation of post-traumatic injuries. The exam, the “MRI of the Cranio-Vertebral Junction,” is a completely separate exam from a routine cervical spine study.

This joint possesses great mobility, but at a price of reduced stability and increased vulnerability to injury. A main stabilizing ligament of the cranial-cervical region is the alar ligament. The alar ligaments connect the odontoid process (dens) of the axis vertebrae (C2) to the occipital condyles of the occiput bone of the skull. Alar ligaments consist primarily of collagen proteins with a few elastic fibers.

When the head rotates, the alar ligaments twist around the dens. Reaching 90° rotation, these ligaments are maximally tightened and obtain an anteroposterior orientation. Such tightened, anteroposteriorly-oriented alar ligaments are more vulnerable to hyperextension-hyperflexion trauma than relaxed, transversely oriented ligaments. Acutely, injured ligament permits influx of edema or hemorrhage, which, on MRI, is seen as bright areas interspersed within dark collagen fibers.

Numerous research studies have looked at acute and long-term consequences of whiplash injuries. Vetti, et al (2009) showed that there is strong evidence for causal relationship between trauma and alar ligament lesions. Alar ligament changes were unrelated to age and type of trauma. Spinal degeneration and signal lesions may persist for months to years.

In a study looking at long-term status of whiplash-injured patients (Gargan, 1990), researchers reviewed 43 patients who had sustained soft-tissue injuries of the neck after a mean 10.8 years. Of these, only 12 percent had recovered completely and 88 percent suffered from residual symptoms. Of these residual symptoms, 28 percent were intrusive and 12 percent were severe, indicating that 40 percent of whiplash-injured patients continued to suffer from significant residual symptoms more than a decade after being injured. In fact, after two years, symptoms did not alter with further passage of time, remaining chronic.

A 1996 study by Squires, et al. reviewed the long-term status of whiplash-injured patients 15.5 years after injury. The authors documented that 70 percent of the patients continued to complain of symptoms referable to the original accident.

Chronicity of symptoms for many patients following whiplash trauma is scientifically well established. Consequently, numerous clinical investigations have been performed in the assessment of the tissue origin of these symptoms. These investigations have included the careful fluoroscopic insertions of anesthetic needles using gold-standard protocols and techniques. The majority of these studies have focused on the tissues of the lower cervical spine. In their 1993 study, Bogduk and Aprill demonstrated that the facet joints of the lower cervical spine and the annulus of the disc are significant tissue sources for chronic whiplash injury symptoms.

More recently, researchers have turned their attention to the tissues of the upper cervical spine (C1-C2) as a source of chronic symptoms following whiplash trauma, especially if the symptom complex includes headaches. Because of the lack of a disc and the horizontal nature of the facet joints, the stability of the atlanto-axial complex depends mainly on the ligaments and muscles. Cranial cervical junction ligament injury may prove to be the structural substrate for the chronic whiplash syndrome.

Specifically, these researchers have focused on the alar ligaments since they show the most consistency with disability scores and it was the structure with the most frequent high-grade MRI abnormalities. Recent advances in MR imaging have enhanced the assessment of the health of the alar ligaments. Structural changes in the alar ligaments in the late stage of whiplash injuries can be characterized and classified using high-resolution proton density-weighted MRI.

Alar ligament problems pose both mechanical and proprioceptive problems for the patient and treatment is often sought. Ice to the neck helps reduce acute pain and swelling. Painkillers or other drugs including non-steroidal anti-inflammatory drugs (NSAIDs), like ibuprofen (Advil, Motrin) or naproxen (Aleve) help with pain and swelling. However, these medicines or other prescription painkillers and muscle relaxants can have side effects and should not be taken unless under a doctor’s supervision.

A neck brace or collar can add support, if a doctor recommends it; collars are not recommended for long-term use because they can actually weaken the muscles of the neck. Moist heat to the neck using warm, wet towels may help but only after 2-3 days of icing it first. Heat should be used on the neck only after the initial swelling has gone down.

The primary whiplash treatment for joint dysfunction, spinal manipulation, and involves the chiropractor gently moving the involved joint into the direction in which it is restricted. Also known as a chiropractic adjustment, spinal manipulation may involve the application of a short thrust in that direction. In many cases, instead of a thrust, a slow mobilizing movement consisting of gentle stretches to the muscle that has excessive tension or repeated contractions of the muscle that is inhibited. If the muscle is very tight, a more vigorous stretch may be applied by the chiropractor. Gentle finger pressure techniques may be applied to trigger points to relieve the pain associated with the tight muscles.

Since the late 1980’s we have known that the alar ligaments can be injured from neck trauma. An abnormal alar ligament is the strongest predictor for severity of subjective symptoms and functional disability in whiplash-injured patients. Alar ligament injuries are often permanent. The best diagnostic tool to assess soft-tissue injury to the upper-cervical ligaments and membranes is the proton density-weighted MRI examination. The increasing severity of MRI findings of soft-tissue structures in the upper cervical spine is related to increasing levels of neck pain and functional disability, as experienced by persons with a diagnosis of whiplash injury. 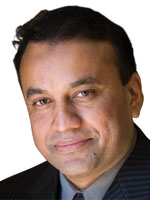 Sana U. Khan, M.D., Ph.D. is a radiologist and neurophysiologist affiliated with
Expert MRI. Expert MRI has diagnostic- imaging offices throughout Southern California. He is a Phi Beta Kappa graduate of UC Irvine and received his medical training at UCLA Medical School.