Exhibits can be vital to your appeal. Here’s when and how to submit them to the court

As any trial lawyer reading this article is well aware, trials – especially personal-injury trials – involve much more than testimony. Visual aids are almost always helpful, even necessary, to making an effective presentation to the jury. Indeed, research studies have concluded that people more easily remember what they see than what they hear. Professional publications, both in print and on the internet, abound with advice to use visual aids. Indeed, it is doubtful that any trial lawyer would dispute the usefulness of visual aids. Common types, of course, are photographs, videos, computer animations, X-rays, charts, and diagrams. What is less often appreciated is that exhibits can also be useful – again, even necessary – to an effective presentation on appeal.

When and why trial exhibits matter on appeal

Trial exhibits can be useful, even necessary, in at least six common circumstances.

The first situation and most obvious is when the exhibit itself is the matter in dispute, for example, when a party argues on appeal that the trial court erred by admitting an exhibit into evidence or, conversely, by excluding an exhibit. In this situation, the exhibit is necessary because, without it, the appellate court cannot make an informed decision on the trial court’s evidentiary ruling. Indeed, if the party challenging the ruling does not submit the exhibit to the appellate court, that court likely would deem the argument to be waived because a party challenging a trial court ruling bears the burden of overcoming the presumption that the ruling is correct and thus must provide an adequate appellate record that demonstrates the error. (Maria P. v. Riles (1987) 43 Cal.3d 1281, 1295.)

The second situation is when the defendant argues that the trial court’s judgment – the victory for the plaintiff – is not supported by substantial evidence. To measure the sufficiency of the evidence, the appellate court must review the entire record on appeal. (Soule v. General Motors Corp. (1994) 8 Cal.4th 548, 580.) The record is often thought of only in terms of the testimony, i.e., the Reporter’s Transcript, but “all exhibits admitted in evidence, refused, or lodged are deemed part of the record.” (Rule of Court 8.122(a)(3).) (All further references to “Rule” or “Rules” are to the California Rules of Court unless otherwise specified.) Thus, the plaintiff’s trial exhibits can bolster his or her argument on appeal that the verdict and judgment are supported by substantial evidence. In fact, one or more exhibits may be as or more important than testimony for this purpose.

The third circumstance arises when the appellant alleges instructional error by the trial court. The rule, of course, is that “A party is entitled upon request to correct, nonargumentative instructions on every theory of the case advanced by him which is supported by substantial evidence.” (Soule, supra, 8 Cal.4th 548, 572, italics added.) So, if a party is arguing that a particular instruction should have been given, that party must show that substantial evidence warranted giving the instruction. And because trial exhibits are part of the evidence, if they are relevant to the instructional issue, they should be considered by the appellate court. Conversely, if a party is arguing that the instruction was properly refused, that party will want to show that the evidence – including the exhibits – did not support giving the instruction.

The fourth situation deals with prejudice for an alleged error, whether instructional or otherwise. The California Supreme Court made clear in Soule, supra, 8 Cal.4th 548, that “No form of civil trial error justifies reversal and retrial, with its attendant expense and possible loss of witnesses, where in light of the entire record, there was no actual prejudice to the appealing party.” (Id., at p. 580, italics added.) More specifically, the appellate court must consider several factors, including “the state of the evidence.” (Id., at pp. 580-581.) Of course, exhibits are evidence and are thus part of the record, so they can and should be considered in determining whether the alleged error was prejudicial.

A fifth circumstance in which exhibits matter is when they assist the appellate justices in understanding what actually happened that gave rise to plaintiff’s suit. For example, in a personal-injury action, photos, diagrams, and computer simulations can greatly assist the justices in understanding how an accident occurred. Even if the facts of what occurred, e.g., how two vehicles collided, are not in dispute, these visual illustrations help the appellate court understand the factual background of the case.

A sixth situation may be less obvious but is nonetheless worth considering. Just as an exhibit can provide emotional context for a jury, an exhibit can do the same on appeal. Appellate justices, of course, will deny that they are ever influenced with emotional matters, but that claim is pure poppycock. Emotional context, by itself, may not cause an appellate justice to reach a certain conclusion, but that context may well have a subconscious effect on the justice. If, for example, the appeal arises from a plaintiff’s verdict in a wrongful-death vehicle-crash case, the same types of exhibits, e.g., family photographs, that likely influenced the jury may at least subconsciously affect the appellate justices as well. The same is true of photographs of the plaintiff’s injuries. Likewise, photographs of a crumpled vehicle will pack more punch than any verbal description of the wreckage.

How to submit exhibits to the appellate court

If exhibits are useful or even necessary for an appeal, the next question is how best to submit them to the appellate court. The answer may be more detailed than one might expect.

If the appellant chooses under Rule 8.122 to proceed with a Clerk’s Transcript rather than an Appellant’s Appendix, he must designate the exhibits he wants included in the transcript. “[A] party wanting a copy of an exhibit included in the transcript must specify that exhibit by number or letter in its notice of designation.” (Rule 8.122(a)(3) & 8.122(b)(2)(B).) If the respondent wants the transcript to include exhibits not designated by the appellant, the respondent may specify those exhibits in its counter-designation of the record. (Rule 8.122(a)(2).)

The foregoing procedures will be sufficient for cases in which a party wants the appellate court to have a copy of an exhibit such as a written document or a photograph. And for most exhibits, including photographs, copies will be sufficient. Indeed, only copies are included in either a Clerk’s Transcript or an Appendix. But there are exhibits that cannot be submitted as a document in either a Clerk’s Transcript or an Appendix. For example, exhibits such as videos or animations cannot be submitted as a document, either in paper form or electronically. The same is true of a physical object such as a component part in a product-liability action. In such cases, either the original exhibit or copies of it, e.g., a duplicate video, must be physically submitted to the appellate court. There are two ways to do so.

But that is not necessarily the reality. A “work-around” is to include in an Appendix an entry for such an exhibit, again, for example, a video. On the appropriate page of the Appendix, put something such as “Plaintiff will submit a DVD of this exhibit to the Court of Appeal.” Then, when the party files its Appendix, the party can send the DVD to the appellate court with an accompanying letter. To illustrate: The First District Court of Appeal’s Rule 16(i) deals with documents that cannot be filed electronically. Technically, the rule deals only with documents. But in practice, the court allows this procedure. So, a copy of a live-action video or an animation can be submitted to the appellate court. In fact, some courts require this. The Second District Court of Appeal requires that audio or video files “must be delivered to the Clerk’s Office on a DVD, CD or flash drive.” (Second District Electronic Formatting Requirements and Guidelines, No. 5.)

So, now let us assume that all the exhibits you want the appellate court to consider are now at that court, either in an Appendix or otherwise. Are you finished? Probably not, because you want the exhibits to be as easily accessible as possible. Thus, for especially important exhibits, include them in the brief. There are two ways to do so.

First, California Rule of Court 8.204(d) permits a party to submit up to ten pages of exhibits or other matters in the appellate record. Doing so is helpful to the court because the brief’s reader does not have to turn to a separate document (a Clerk’s Transcript or an Appendix) to find and review the exhibit. This makes it more likely that the appellate judges will actually see your exhibit. It is no secret that much, perhaps most, of the case work-up in the courts of appeal is done by the court’s staff attorneys and law clerks. They are much more likely than the judges to delve into an Appendix to review exhibits. Do not assume that a judge will see a reference in your brief to an exhibit and then actually look for the exhibit in the Appendix. That should be fairly easy now that Appendices are filed in electronic format. But not all judges are inclined to read materials on a computer screen or to print-out your Appendix. So, take use the opportunity to attach exhibits to you brief.

Second, and sometimes even better, now that briefs are written on computers, it is relatively easy to insert exhibits directly into the body of a brief. A photo or diagram can be placed into the brief at the point where it is most effective. For example, if you state that “The Jones automobile was destroyed by defendant’s 18-wheeler,” place a photograph of the destroyed car at that point in the brief. It is most effective there. Also, because photographs and diagrams used this way are in the text but not part of the text, they will not be included in the word count for your brief.

There is, though, a technical tidbit that merits note. All the courts of appeal require briefs and appendices to be e-filed. (Rules 8.70 to 8.79.) The data limit for e-filings is 25 MB per file. (See, e.g., First District Local Rule 16(b)(1).) Documents that exceed this data limit must be submitted in parts. Photographs in particular can add considerably to a file’s size, either in a brief or in an appendix. So be aware that attaching photographs to a brief or inserting them into the body of a brief may require the brief to be submitted in parts.

In summary, making sure that the appellate court has exhibits that help your case can sometimes be time consuming and maybe even boring detail-work. But the effort is worth the reward because exhibits, especially visual exhibits, can be as or more persuasive than the written words in a Reporter’s Transcript. 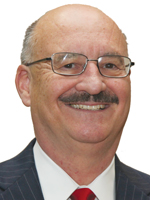 Gary Simms was a senior judicial attorney at the California Supreme Court for almost nine years for former Justices David Eagleson and Marvin Baxter. Simms is certified as an appellate specialist by the State Bar of California’s Board of Legal Specialization. Since leaving the Supreme Court, he has represented plaintiffs on appeal in the California Courts of Appeal and Supreme Court, the U.S. Ninth Circuit Court of Appeals, and appellate courts in Oregon and Texas. Simms serves on the Amicus Curiae Committee of the Consumer Attorneys of California. Simms has offices in Davis, California and Ashland, Oregon. He can be contacted at glsimms@simmsappeals.com.