A very short primer on practice and procedure

When is a tort claim required?

There are several exceptions and exemptions to the tort-claim requirement, but as a general rule you cannot sue the government for money or damages unless you have first filed a claim within the statutorily specified time period.

The public policy behind the Tort Claims Act is to provide the public entity with sufficient information to enable it to adequately investigate claims, to settle claims (if appropriate) without the expense of litigation, and to financially plan for lawsuits.

When is a tort claim not required?

Government Code section 905 contains a list of the “exemptions” from the Tort Claims Act. However, the exclusions enumerated in section 905 are not exclusive. Various other exemptions are also recognized by case law. For example, claims by minors (under the age of 18) related to sexual abuse they experience in their minority (Gov. Code, § 905, subd. (m)) are exempted from the tort-claim requirement.

Additionally, if a statute exists containing a different procedure for filing claims, then no claim under the Government Claims Act is required. For example, employment-discrimination claims against a public entity under the California Fair Employment and Housing Act (FEHA claims) are not subject to claim-filing requirements because FEHA has its own procedures that ensure adequate notice to the public entity.

What is a “public entity”?

Some public entities are obvious; if it is unclear whether defendant is an exempt public entity, your “mistake” as to its status will not exempt you from the filing deadlines. To determine if your defendant is a public entity, first check its website (look generally for language stating its relation with the state, insignia, tort claims forms, etc.) and also check the “Roster of Public Agencies” by calling the Secretary of State’s Special Filings department at (916) 653-3984.

You may also simply call/email the defendant to ask whether they are a public entity requiring a tort claim and confirm their response in writing. If the defendant misleads you as to its name, its status as a public entity, or regarding the need to file a claim, this may create an estoppel argument.

Accrual of cause of action refers to the date on which the statute of limitations would begin to run if there were no claim requirement. Generally, this date will be the date of the injury. (Gov. Code, § 901.)

After presentation of the claim, the public entity has 45 days to either accept or reject the claim. If it does not act within the 45 days, then the claim is deemed rejected. After rejection of your claim, you have six months to file your complaint.

If the public entity has a specific form they require for tort claims, you must use it. (Gov. Code, § 910.4) For example, LAUSD has a specific LAUSD tort-claim form that you can access by calling their district office and requesting.

If no form is available, you must submit a typed claim including: (1) the name and address of the claimant, (2) the date and place of the incident out of which the claim arose, (3) a general description of the damage sustained, (4) the names of any public employees involved, and (5) the dollar amount of the claim if it is less than $10,000. Claims over $10,000 should state that they “exceed the jurisdictional limits of the Court.” You are not required to include a dollar amount if your claim is for more than $10,000.

Generally, failure to comply with the Tort Claims Act completely bars the claim against the public entity or its employees. If you are required to file a claim, and your claim is not exempted by statute or case law, you may still get around the filing requirement in certain limited circumstances. A few examples are as follows:

Estoppel: If the entity (or its employees) do anything to mislead, prevent or dissuade the claimant from filing her claim, the entity may be estopped from arguing that the claimant’s claim came in late. (See, e.g., John R. v. Oakland Unified School Dist. (1989) 48 Cal.3d 438.)

Prior payments by the public entity (paying for medical expenses after injury): If a public entity has previously made payments to the claimant without first notifying claimant of claims requirement, the claimant may be excused from the tort-claim requirement. This most often comes up in a situation where the entity has paid for medical care related to the injury sustained by the claimant and caused by the entity or its employees. (See, e.g., Maisel v. San Francisco State Univ. (1982) 134 Cal.App.3d 689.)

Request for relief from late filing: If your claim is late, meaning it was filed more than six months after accrual, but less than one year after accrual, you may still file your claim and seek relief from the late filing. The claimant has up to one year after accrual of the cause of action to apply in writing to the public entity for permission to file a late claim. The application must state the reason for the delay and be accompanied by a copy of the proposed claim. (Gov. Code, § 911.4.) 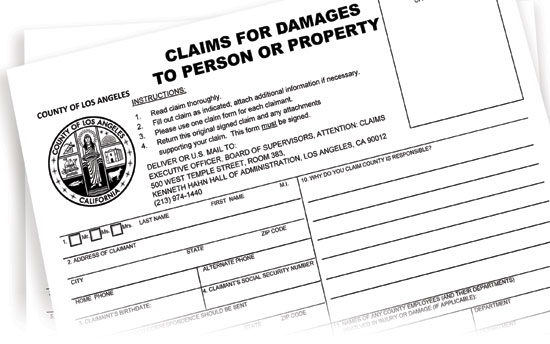