Remember the “Terrible 200s?” They were defeated by our engagement in the political process

I grew up in Chicago in the late ‘60s and ‘70s. I have a vague memory of the unrest during the ‘68 Democratic Convention in Chicago, a definite memory of the war in Vietnam and my brother being registered for the draft. Having grown up in Chicago, observing my parents’ keen interest in the Watergate Hearings, social and political issues in the news, I have always been drawn to civil engagement and politics. Being exposed to a regular diet of School House Rocks’ episodes on the legislative and political process sure helped too, I imagine.

It is perhaps ironic then, that when I graduated from law school and entered practice, I did not immediately think of political engagement as a component of my practice of law. I joined Consumer Attorneys of California shortly after entering practice. It was not until a few years later, receiving the clarion call from CAOC leadership about the “Terrible 200s” that I reconnected the inextricable link between political engagement and the fight for civil justice that we trial lawyers are engaged in on a day-to-day basis.

For those who do not remember, the “Terrible 200s” were a series of three initiatives qualified for California’s 1996 presidential primary ballot. These initiatives were a concerted effort to gut civil justice and consumer rights in California. Proposition 200 sought to impose a no-fault auto insurance system in California, removing automobile negligence actions from the civil justice system. Proposition 201 would have made shareholder actions for financial fraud much more difficult for plaintiffs through imposition of bond requirements for corporate defendants’ estimated legal fees and expenses, “loser pays” attorneys’ fees and expenses (including in both class actions based upon securities law violations and shareholder suits), and provisions allowing plaintiff’s counsel to be personally responsible for the attorneys’ fees and costs of corporate defendants. Proposition 202 would have imposed a 15 percent cap on contingency fees in personal injury, wrongful death and other tort cases. The Terrible 200s were funded by insurance companies, large corporations and the Chamber of Commerce, which collectively raised and spent $56 million ($90 million today) to push the initiatives. The trial lawyer community throughout California, galvanized by this assault on the civil justice system and the very viability of many of their practices, fought back. Under the leadership of then-CAOC President Mary Alexander, trial lawyers raised over $3.7 million to oppose these initiatives. Just as importantly, they engaged in a grassroots campaign to communicate the insidious nature of these initiatives to the voters.

Fortunately, the terrible 200s were defeated. Prop 200’s no-fault system was rejected by over 30 percent of voters. Prop 201 was rejected by 29 percent of California voters. Proposition 202’s 15 percent contingency fee cap lost, but by a mere 2.5 percent margin. Imagine the face of civil justice, our client’s access to quality representation and advocacy, and the viability of your trial lawyer practice in California had these initiatives succeeded. The relief and sense of triumph within California’s trial lawyer community following the defeat of the Terrible 200s is difficult to overstate. With that relief and sense of triumph was an underlying sense of engaged commitment to the political and legislative process by rank and file members of the trial lawyer community. High profile, life and death struggles have that effect.

It took the battle of the Terrible 200s to remind me, and I think a lot of the other trial attorneys out there, that the fundamental nature of our practices, and our very beliefs as trial attorneys, mandate our ongoing engagement in the political and legislative process. Lesson learned.

Let’s face facts. As trial attorneys, our historic opponents have forever been the very large corporations and insurance companies that have injured our clients or who are financially responsible for the wrongs done to our clients. The very reason trial lawyers first banded together to form trial lawyer associations was the recognition that they were up against companies and corporations with seemingly bottomless pockets and endless resources. They needed to act to level the playing field for their clients and practices. Since their inception, trial lawyers and trial lawyer organizations have stood as the single most powerful, persistent voice for consumer rights and access to civil justice, and against the rich and powerful that would trample upon those rights and immunize themselves from the damages they inflict.

The battle of the Terrible 200s was simply a very visible, obvious microcosm of the very battle that lies at the heart of the trial lawyer’s identity and existence, and that of our community. The road to our client’s right to civil justice neither starts nor ends in the courtroom. It is a battle that is fought in the courtroom, in the legislature, in the community, in elections, and in political debate daily.

There has not been such a high-profile attack on consumer rights, access to civil justice, and our very practices since the Terrible 200s. Yet make no mistake: The battle rages on. During the administration of former Gov. Arnold Schwarzenegger, anti-consumer initiatives attacking class actions, punitive damages, the rights of the disabled, and residential construction defect actions were attempted, but failed to reach the ballot. Pro-business and anti-civil justice legislators in Congress and the California State Legislature are consistently pushing bills that would erode access to civil justice, consumer rights, and our trial lawyer practices daily. Contingency fee caps (PICRA), forced arbitration, protections for insurance companies against policy limits demands, fee caps on public entity claims, restrictions and elimination on PAGA, limits on joint and several liability, weakening of wage and hour laws and remedies, liability immunities, tort “reform” – each of these were the subject of California legislative bills in the 2017-2018 legislative session alone.

It is therefore always surprising to me when I speak with fellow trial attorneys who shun political conversation or dismiss the importance of political engagement. Sure, in today’s age political discourse can often be difficult, coarse and hyper-partisan. But we are not talking about issues that are inherently partisan. Skilled advocates in the courtroom are typically skilled communicators outside of it. Trial lawyers are inherently the best, and most highly trained advocates for advancing our issues through educating the public, our elected officials and our community leaders.

I ask everybody reading this article to ask themselves: What am I doing outside the courtroom to advance the cause of consumer rights and civil justice?

Here are some things you can do:

Join and support CAOC and AAJ

CAOC, and nationally, the American Association for Justice, fight every day for our clients’ rights and the viability of our practices by advocating for and against legislation in Sacramento and Washington, DC, and helping to elect responsible legislators who will support and protect our clients’ rights. These are organizations of which every trial lawyer should be a member and support for the work they do.

Yet that is not enough. The strength of the trial lawyer community does not, and cannot, exist solely within these organizations and their staffs. Ultimately, the strength of any group in either Sacramento or Washington, DC, is measured by their visibility and engagement with the individual legislators themselves.

Every year, a group of OCTLA members makes the annual trip to Sacramento to participate in CAOC’s Justice Day to meet with legislators (including their own representatives) on bills which are part of CAOC’s legislative focus for the year. The experience is a transformative experience in the legislative process.

Advocacy is neither free nor cheap. Nor is getting quality candidates elected or re-elected once in office. Both are essential to counteracting the insidious impact of unrestricted finances of those corporations and interests which push anti-consumer legislation every year. Let good legislators know you support them.

Know your local legislators and let them know you

When you become aware of bad legislation, or good legislation, contact your local legislator and ask them to support the legislation. Show up at community forums where they are present and ask for their positions on critical bills. Bring friends and family with you. Learn what committees they are on, and call when the legislation is held hostage in committee.

Today’s city councilman or school board member is tomorrow’s assemblyman or senator. Develop your relationships now and support those leaders who openly and publicly commit to the causes and issues important to the trial lawyer community.

The road to civil justice neither starts, nor ends, on the courtroom steps. In any given year, trial lawyers, through the work of CAOC, AAJ, and through personal engagement with our elected officials, push back on dozens of anti-consumer, anti-civil justice and tort-reform bills. Our continued success requires ongoing engagement by all members of the trial lawyer community.

Get involved. Stay engaged. Be a leader for consumer rights and civil justice. As a trial lawyer, it is in your DNA. 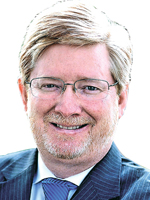 B. James Pantone is an attorney with the law firm of DiMarco | Araujo | Montevideo, A Professional Law Corporation, located in Santa Ana, where his practice is dedicated to the rights of injured parties with a focus in the areas of product liability, wrongful death and personal injury.