The best kind of power lunch

A tribute to the late Beverly Reid O'Connell and her legacy, the Superior Court Power Lunch. And a special look at how it changed a life

About twelve years ago, one of our most beloved colleagues on the Los Angeles Superior Court, the late Beverly Reid O’Connell, was enjoying a cup of coffee with close friend Maria Carman when the latter, a high-school teacher, began to lament the lack of engaging civics education programs for high school students.

As was her nature, Judge O’Connell wanted to help. How could they fill this vacuum? Within a couple minutes, the two friends were brainstorming ideas about bringing students and lawyers together at courthouses and introducing the students to different aspects of our legal system. How about having the students meet with judges and attorneys in small mentorship circles where the students would feel more at ease about asking questions? How about inviting elected and appointed officials to share the obstacles they encountered on their path to success? How about teaching the students the protections of the Fourth, Fifth, and Sixth Amendments through a fun and interactive game? As these ideas started racing, Judge O’Connell scribbled notes on a Starbucks napkin. By the end of the conversation, she had accumulated several note-filled napkins.

Judge O’Connell was not one to let an idea go to waste. She began to explore the possibility of using courthouse facilities as a positive setting to gather and welcome the students. She recruited judges, attorneys, and other vital court employees to lead breakout sessions with the students. Within a couple months, she helped to create a Legal Jeopardy game to introduce the Constitution and other important legal concepts to students in an engaging way. She also forged a partnership between the L.A. Superior Court and the Women Lawyers of Association of Los Angeles (WLALA) to ensure that this would be an enduring program.

Hence was born the Los Angeles Superior Court’s Power Lunch program. The first Power Lunch took place on April 25, 2007 at the Stanley Mosk Courthouse, where the Court hosted 72 students from Crenshaw High School. Six months later, nearly a hundred students from West Adams Preparatory School came to another Power Lunch at the Stanley Mosk Courthouse. Since the program’s inception, Power Lunches have brought more than 3,000 high school students from the far corners of our county – including Antelope Valley in the north, Long Beach and Bellflower in the south, Pomona in the east, and Torrance in the west – to our courthouses to meet with more than 600 attorneys and an even greater number of judge volunteers. Sixty-five Power Lunches later, the program is as vibrant and strong as ever.

At these Power Lunches, students learn about careers in the legal field and speak with judges and attorneys about their career paths and life struggles. Judges and attorneys have become so enthusiastic about volunteering for the program that the mentoring circles have at times achieved a one-on-one ratio of mentor to student. Students at Power Lunches hear from bailiffs, court reporters, interpreters, court clerks, and members of law enforcement who describe their role within the courts and their career paths. Power Lunch attendees often tour the courthouse and watch proceedings in real cases before or after the Power Lunch itself.

In an ongoing effort to reach out to diverse groups, the Power Lunch program draws local high-school students mostly from economically disadvantaged communities. Many of the students who have attended Power Lunches have never previously met or spoken with a judge or attorney. The Power Lunch program provides a unique window of opportunity for these students to explore a potential new career path.

One particularly inspiring story springs from one of the earliest Power Lunches at the Van Nuys Courthouse. Judge Joseph Brandolino has been a stalwart supporter of the program and faithfully organizes a Power Lunch at the Van Nuys courthouse every year. At the inaugural Van Nuys Power Lunch on June 3, 2010, Judge Brandolino met sophomore Pedro Vargas Ayala from Grant High School. Pedro’s parents had not attended high school. Without strong grades or guidance, Pedro did not believe that college was an option for him either. As a kid, Pedro recalls being told that he had a 50/50 chance of going to prison or dying before the age of 21.

All of Pedro’s prospects changed when he walked away from that Power Lunch with a life-long mentor. Judge Brandolino took Pedro under his wing and encouraged Pedro through grueling late nights of studying for exams and writing papers. As a reward and motivation for Pedro’s hard work, Judge Brandolino and his wife treated Pedro to Dodgers games and shows at the Hollywood Bowl and Pantages Theater. By senior year, Pedro had pulled up his GPA to an A+ average for that year. He went on to California State University, Northridge and double-majored in economics and business administration and double-minored in finance and marketing. Pedro graduated with honors (approximately a 3.8 GPA) despite carrying a heavy and challenging course load. After a year off, Pedro proceeded to law school, earning the same high marks and praise from his law school professors.

Bringing his Power Lunch experience full circle, Pedro landed a summer externship after his first year of law school with a federal judge – none other than the Honorable Beverly Reid O’Connell! By this time, Judge O’Connell was serving on the district court for the Central District of California, and Pedro was part of the last class of externs to work with Judge O’Connell. Judge O’Connell helped Pedro hone his writing skills. She scheduled individual lunches with each of her externs and took a personal interest in getting to know them. On the last day of his externship, Pedro’s parents came to visit, and Judge O’Connell graciously welcomed them to her chambers. Pedro recalls that “one of the last things Judge O’Connell told me . . . after we had lunch [was that] . . . if there’s one thing she wants me to take away from my entire experience working for her . . was that becoming a judge is something that is absolutely attainable for me. Just like going to college was when I was in high school.”

Throughout all these years, Judge Brandolino has steadfastly remained by Pedro’s side, providing sage advice and helping Pedro navigate his way through a demanding undergraduate, then law school, curriculum. Pedro graduated from law school two weeks ago. As always, Judge Brandolino was there to cheer him on at his graduation.

The law school that Pedro attended – Notre Dame Law School – has a unique tradition of allowing its graduating class members to each present a “stole of gratitude” – a cloth with varying colors and emblems draped around the shoulders as an expression of thanks and appreciation. As Notre Dame’s website explains, the tradition arises out of a pre-medieval legend. A monk traveling on a missionary pilgrimage found in the countryside a starving, young, dazed orphan. The only thing the boy carried was a piece of fabric from his mother’s clothes that had torn off in his hand as a marauding invader on horseback took her away. The monk taught the boy to read and write and schooled the boy in literature, history, and science. When the boy left the monastery, he became squire to a knight, who further trained him in horsemanship and swordsmanship. Ultimately, the boy rose to become a widely respected royal ambassador. As a grown man, he created two cloth stoles using fabric from his mother’s dress, the wool from his monastic robes, and the silk tunic he now wore, and he presented these two stoles to the monk and the knight to proclaim his gratitude for their kindness and generosity.

In the same vein, Pedro happily participated in this special Notre Dame tradition and made sure to present Judge Brandolino with a stole to wear at his graduation. Pedro shares: “Graduating from law school was a dream come true. . . The power lunch was the first step in a large chain of events that allowed me to be where I am right now. I am very fortunate to have Judge Brandolino in my life. He is an amazing mentor, a role model of mine, and one of my dearest friends. He always tells me that my success is a product of my hard work, but I would not be here without him. He always makes time to give me guidance and advice in difficult times and has done so in the middle of a busy day on multiple occasions. He believes in me and in my dream of becoming a member of the legal profession in Los Angeles. He is a great judge and an even greater person.” As for Judge Brandolino? He could not have been prouder as he hooded Pedro at the graduation ceremony.

Judge Brandolino and Pedro are a shining example of the powerful impact that a good mentor can make. Their special relationship embodies the type of enduring mentorship that the L.A. Superior Court’s Power Lunch program is intended to nurture, and precisely what Judge O’Connell envisioned when she launched the program in 2007.

What started out as coffee with a friend and scribbled notes on some Starbucks napkins has blossomed into a fun and exhilarating civics education program that provides mentorship and exposure to the judicial branch for countless high school students. Through the Court’s partnership with WLALA and Judicate West’s renewal of its generous grant to WLALA year after year, the Power Lunch program continues to grow and expand to more schools and more courthouses.

On January 26, 2018 – approximately three months after Judge O’Connell’s passing – the Los Angeles Superior Court dedicated and renamed the program the “Judge Beverly Reid O’Connell Power Lunch program” to honor the foresight and compassion of its visionary founder. WLALA has formed a scholarship fund to be awarded annually to a woman high school senior who is interested in the field of law or public service and was inspired in this career choice by the Power Lunch Program, the WLALA organization, or a WLALA leader. Words can never capture the warmth of Judge O’Connell’s personality, the immediate rapport that she developed with students at every Power Lunch, and the enthusiasm that she exuded when calling on students with correct responses to a Legal Jeopardy question, but we can all carry on her lasting legacy of helping others and inspiring youth for generations of high school students to come. 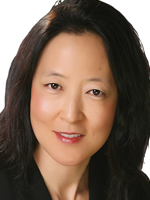 Elaine Lu was appointed to the Los Angeles Superior Court in 2007. She presides over a civil general jurisdiction independent calendar court at the Stanley Mosk Courthouse. As Co-Chair of the Los Angeles Superior Court’s Power Lunch Subcommittee, Judge Lu helps organize Power Lunches to bring high school students, lawyers, judges, and court staff members together at courthouses throughout the county to discuss career choices and the legal system. Judge Lu also presides over the Pasadena Teen Court program through which selected juvenile offenders are questioned, judged, and sentenced by a jury of Pasadena High School students. Judge Lu has also designed and taught seminars for fellow bench officers on different topics in civil and criminal law.  Prior to joining the bench, Judge Lu served as an Assistant United States Attorney in the Central District of California for ten years. 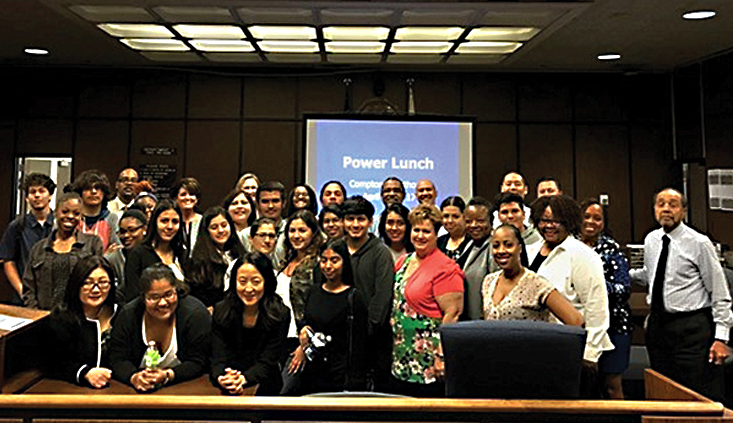 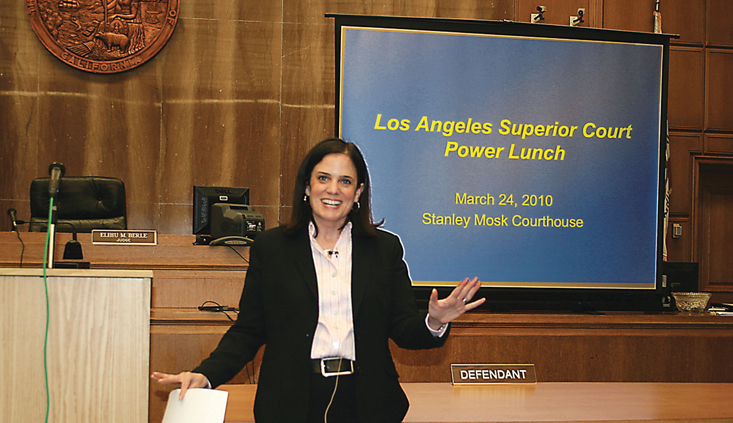 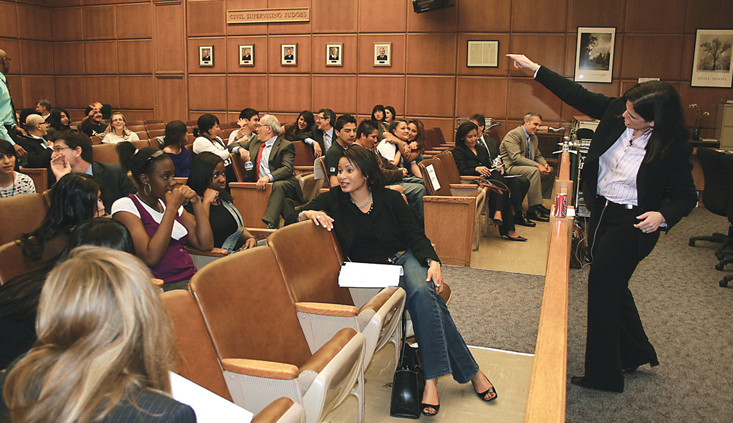 Judge O’Connell makes a point to students at a Power Lunch. 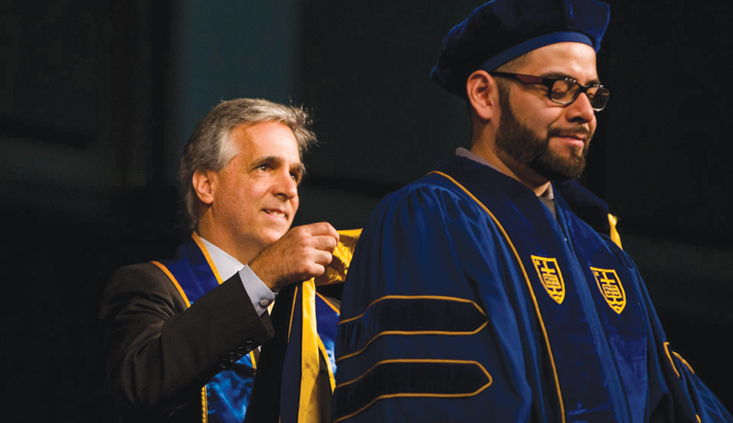