Usually, when we think of stalkers, we think of “Peeping Toms” or unyielding paparazzi. Although some stalkers are strangers, the majority are actually co-workers, friends, fellow students, neighbors, and former spouses or partners. Stalking can occur in the “real” world, but becoming even more prevalent is “cyberstalking,” where a stalker utilizes the Internet, email, telephone, and other electronic means to harass and threaten his or her victim. Both physical- and cyber-stalking can cause emotional harm and the need for mental-health treatment which, along with other damages, are compensable in a civil lawsuit.

A 1998 study by the U.S. Department of Justice and the Centers for Disease Control entitled, “Stalking in America” concluded that, at that time, eight percent of women and two percent of men had been stalked at some point in their lives. (Tjaden and Thoennes. Stalking in America: Findings From the National Violence Against Women Survey. Washington, DC: U.S. Department of Justice, National Institute of Justice, 1998, www.ncjrs.gov.) However, those numbers have been consistently growing, especially in the area of cyberstalking. In 2011, according to the CDC’s National Intimate Partner and Sexual Violence Survey (NISVS), stalking behavior worsened and, as of that time, one in six women and one in 16 men had been stalked during their lifetime. For both female and male victims, stalking was often committed by people they knew or with whom they had a relationship. Two-thirds of the female victims of stalking (66.2%) reported stalking by a current or former intimate partner and nearly one-quarter (24.0%) reported stalking by an acquaintance. About one in eight female victims (13.2%) reported stalking by a stranger. (Black, M.C., K.C. Basile, M.J. Breiding, S.G. Smith, M.L. Walters, M.T. Merrick, J. Chen, and M.R. Stevens, “The National Intimate Partner and Sexual Violence Survey (NISVS): 2010 Summary Report,” Atlanta, GA: National Center for Injury Prevention and Control, Centers for Disease Control and Prevention, 2011.) Currently, an estimated 6-7.5 million people are stalked each year in the United States. (www.stalkingawareness.org; Stalking Fact Sheet.)

Stalking behaviors are practically limitless and may include leaving or sending the victim unwanted items or gifts, following or laying-in-wait for the victim, damaging or threatening to damage the victim’s property, defaming the victim’s character, using technology to track the victim, and/or harassing the victim via the Internet by posting personal information or spreading rumors about the victim.

In 1990, California was the first state to pass an anti-stalking law in response to the stalking and murder of Rebecca Schaeffer, a young actress killed by an obsessive fan who had stalked her for many years. Since then, there have been several amendments to the anti-stalking laws, since stalkers have, unfortunately, found more inventive ways to find and harass their victims.

Currently in California, there are both criminal and civil laws that specifically address stalking.

(a) Any person who willfully, maliciously, and repeatedly follows or willfully and maliciously harasses another person and who makes a credible threat with the intent to place that person in reasonable fear for his or her safety, or the safety of his or her immediate family is guilty of the crime of stalking…

Statutory cause of action – Violation of Civil Code section 1708.7

In California, a civil case for stalking can include both statutory and common- law causes of action. California is one of only a handful of states that has a specific, statutory cause of action for the tort of stalking, which is found at Civil Code section 1708.7:

(a) A person is liable for the tort of stalking when the plaintiff proves all of the following elements of the tort:

(1) The defendant engaged in a pattern of conduct the intent of which was to follow, alarm, place under surveillance, or harass the plaintiff. In order to establish this element, the plaintiff shall be required to support his or her allegations with independent corroborating evidence.

(2) As a result of that pattern of conduct, either of the following occurred:

(A) The plaintiff reasonably feared for his or her safety, or the safety of an immediate family member. For purposes of this subparagraph, “immediate family” means a spouse, parent, child, any person related by consanguinity or affinity within the second degree, or any person who regularly resides, or, within the six months preceding any portion of the pattern of conduct, regularly resided, in the plaintiff’s household.

(B) The defendant violated a restraining order, including, but not limited to, any order issued pursuant to Section 527.6 of the Code of Civil Procedure, prohibiting any act described in subdivision (a).

For purposes of Civil Code section 1708.7, the following definitions apply:

“Pattern of conduct” means conduct composed of a series of acts over a period of time, however short, evidencing a continuity of purpose.“Credible threat” means a verbal or written threat, including that communicated by means of an electronic communication device, or a threat implied by a pattern of conduct, including, but not limited to, acts in which a defendant directly, indirectly, or through third parties, by any action, method, device, or means, follows, harasses, monitors, surveils, threatens, or interferes with or damages the plaintiff’s property, or a combination of verbal, written, or electronically communicated statements and conduct, made with the intent and apparent ability to carry out the threat so as to cause the person who is the target of the threat to reasonably fear for his or her safety or the safety of his or her immediate family.“Electronic communication device” includes, but is not limited to, telephones, cellular telephones, computers, video recorders, fax machines, or pagers.“Follows” means to move in relative proximity to a person as that person moves from place to place or to remain in relative proximity to a person who is stationary or whose movements are confined to a small area but does not include following the plaintiff within the residence of the defendant.“Harass” means a knowing and willful course of conduct directed at a specific person which seriously alarms, annoys, torments, or terrorizes the person, and which serves no legitimate purpose. The course of conduct must be such as would cause a reasonable person to suffer substantial emotional distress, and must actually cause substantial emotional distress to the person.“Place under surveillance” means remaining present outside of the plaintiff’s school, place of employment, vehicle, residence, other than the residence of the defendant, or other place occupied by the plaintiff.

In addition to the statutory cause of action under Civil Code section 1708.7, traditional, common-law tort claims should also be alleged, depending on the factual circumstances. The following common-law claims should always be considered:

In addition, causes of action for liability against third parties should be vetted for the following claims:

The primary source of information needed through discovery in stalking cases is the communications between the stalker and the plaintiff. This often involves acquiring electronic media information and depends on the platform or application used. Victims can provide consent for access to their own online accounts, which should be done right away. The information acquired from the victim’s account can then be used to discover the subscriber information about the stalker’s account that is the source of the stalking content. Under the Stored Communications Act (S.C.A.), 18 U.S.C. §§ 2701-2713, various categories of information may be obtained by subpoena or court order. Be aware that stored electronic communications are sometimes only available for a limited time period, so preservation letters to a provider may need to be sent immediately upon signing up the case.

Jury selection can be the most important part of any trial and is of particular importance in a trial involving stalking or harassing behavior. As in any trial involving sensitive or private issues, there must be consideration given to allowing potential jurors to speak openly about their experiences, yet also ensuring they feel comfortable discussing their own embarrassing or traumatizing life events. A juror questionnaire should also be considered.

The following are some questions to consider in selecting a jury in a stalking or harassment case:

• Do you believe that words alone can cause someone emotional distress? If yes, under what circumstances?

• How do you feel about someone suing for emotional harm damages even though he/she was not physically injured?

• Do you believe that someone can be harmed psychologically even if they do not incur physical harm?

• Do you believe that all people are entitled to maintain their privacy?

• Do you believe a person is entitled to collect money damages for someone invading his/her privacy?

• Do you believe a person’s reputation is important?

• Has your reputation among your friends, family or co-workers ever been damaged by another person? If yes, describe the circumstances surrounding the damage to your reputation and how it has affected your life.

• Have you ever experienced any worry, anxiety, stress (etc.) at having your reputation among your friends, family or co-workers damaged? If yes, explain.Do you believe that a stalker has to be someone the victim does not know?

• Do you believe a person can be stalked by someone they know? If yes, explain.

• Do you believe a person can be stalked by someone with whom they are or were in a relationship?

• Have you ever been in a situation where you feared for your safety or the safety of your family as a result of someone else’s conduct? If yes, describe the event. How did it make you feel?

• Have you ever tried to get a court order against someone because they were harassing or stalking you? If not, were there reasons you decided not to?

• Have you ever changed anything in your life due to the stalking or harassment by another person, such as change your phone number, address, email account, your routine, or anything else?

• Has anyone ever had a friend or family member who was stalked or harassed? (Follow up with same questions as above.)

• Have you ever been accused of stalking or harassing another person?

• Has a family member or close friend ever been accused of stalking or harassing another person?

• Do you believe that most people who say they are being stalked are overly sensitive or being paranoid?

• Do you think that there are times where a comment or action by someone is misinterpreted? Can you think of some examples?

• Can you think of the reasons a victim of stalking or harassment might decide not to report it to the police?

• Do you use a computer or other electronic device to go online? How many hours per day?

• Do you regularly use email, either at work or at home? How often?

• Do you regularly text-message others? How often?

• Does anyone not use a cell phone, computer or other electronic device because of concerns of privacy? If yes, explain.

• Do you let your children use a cell phone, computer or other electronic device? Why or why not?

• Do you let your children communicate with strangers on the Internet, for example during video game playing?

• Has your computer or other electronic device ever been hacked? How did that make you feel?

• Have you ever had your identity stolen? How did that make you feel?

Stalking, like other types of harassment, can cause serious emotional harm. In California, anti-stalking laws are an effective way for a victim to seek monetary compensation for that harm. 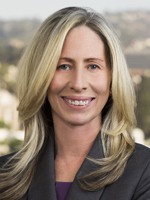 Louanne Masry is an attorney at Taylor & Ring in Los Angeles. In addition to litigating general negligence cases, her specialties include elder abuse and sexual abuse cases. She has been honored as a California Super Lawyer. (www.taylorring.com)