What happened? This simple question can result in contradictory answers from witnesses to a shooting. When the location or posture of those involved in a shooting is in dispute, a biomechanical analysis of the evidence can be key to uncovering what really happened.

Based on knowledge of anatomy and how forces cause injury, a biomechanics expert interprets wound patterns, ballistics evidence, and other physical evidence to determine the most likely location and posture of individuals involved in a shooting. This analysis can be complex, and often involves 3D computer models. In addition to assisting with the analysis, images or animations from these 3D computer reconstructions can be powerful demonstrative evidence.

Example A: In this case, medical images were used to measure the entry and lodgment of a bullet in the injured person’s back. This anatomical information, combined with physical evidence at the scene, helped us determine the torso of the injured person was facing away from the shooter, turned at approximately 45° to the right when the shot was fired. (Figures 1A through 2B.)

Typically, a biomechanical expert relies on medical records or an autopsy to establish injuries and bullet paths based on wound entries and exits. We often assume that bullets travel in a straight path through soft tissues; however, this may not be a valid assumption when bullets are deflected by contact with large bones. If possible, we suggest having a forensic pathologist perform an independent autopsy to peer-review the work of the coroner, gather additional information about wound entry/exit locations, bullet paths through tissues and document more minor injuries such as bruises, abrasions and cuts. These secondary injuries can help a biomechanist understand the dynamics of a fall or other aspects of a shooting event.

Example B: In this case, an analysis of wound locations combined with ballistic and witness evidence resulted in a clear picture of where everyone was located. Audio from a cell phone recording established the total duration of the shooting at 1.8 seconds, making large posture change unlikely. The ballistics evidence from the two involved firearms indicated which shooter fired each grouping of shots. When this information was combined with a biomechanical analysis of wound angles, we were able to determine that the decedent was most likely on the ground on his back for the duration of the shooting. (Figures 3-5.)

A biomechanics expert can help test whether witness accounts are consistent with the wound evidence. Bullet wounds often paint a clear picture of posture and body position, such as how the torso and limbs were aligned when shots were fired. A biomechanical analysis of posture typically starts by mapping shot entries/exits, or other evidence of bullet paths to a 3D computer model that matches the injured party’s body shape and size. The model can then be posed to align wound patterns with the shooter’s relative location. Wound-based posture reconstruction can be compared directly to the statements of those involved to test the veracity of their testimony. Asking a witness to physically demonstrate movement and posture during a video deposition is a useful way to capture what can be difficult to describe in words. This video record can be directly compared to the results of a biomechanical posture analysis to confirm or refute the witness’s description of events.

Example C: In this case, the shooter and decedent’s general location were determined from surveillance video. The video showed the decedent was seated at the time of the shooting, but his exact posture and arm positions were hidden from the camera view. We were tasked with determining his posture when shot. (Figures 6-8.)

The wound patterns made it clear that the decedent had his right arm across his body when he was shot. During deposition, the shooter testified that the decedent was attempting to stand, leaning forward, with his arms on his thighs. While it’s possible his left arm was on his thighs, the posture reconstruction based on bullet wound trajectories indicates his right arm was across his chest with his torso in an upright position, in contrast to the shooter’s testimony.

Incident reports, medical records, autopsy report, witness statements, and the deposition testimony of witnesses and involved parties are essential materials needed for a biomechanical analysis. Scene photographs, surveillance video and bodycam footage often provide additional information. In many cases, we perform site inspections of our own to make accurate measurements of the scene for our own diagrams and analysis.

Collecting evidence early is important. We like to visit the scene as soon as possible to canvas for surveillance videos, witness videos, and to document the scene before things change meaningfully. Typically, we use a 3D laser scanner to accurately measure the scene. 3D laser scans are the ‘virtual stage’ where the posture reconstruction and position analysis are performed in computer software. The sooner the scanning and photo documentation can be performed by an expert, the better it represents the scene as it was on the day of the incident.

Although not discussed in detail in this article, video evidence is becoming increasingly common. The analysis of video can play a key role in shooting cases, especially when used in conjunction with a biomechanical analysis of injury. Securing all video evidence quickly and in the best format is important.

In conclusion, a biomechanical analysis of shooting injuries can uncover the story told by physical evidence and support your legal arguments. The early involvement of an expert can help you ensure that the necessary evidence is collected and that witness depositions are comprehensive. And finally, because 3D computer models are integral to the analysis, powerful 3D graphics are available to help tell the story at trial. 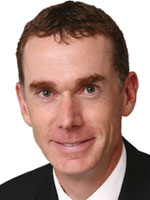 John Gardiner, PhD PE, is a Principal and Senior Biomechanical Engineer in the Orange County office of MEA Forensic Engineers and Scientists. He has a BS degree in Mechanical Engineering, a PhD in Bioengineering, and is licensed as a Professional Mechanical Engineer by the State of California. Dr. Gardiner is responsible for conducting investigations to assess injury mechanics in a variety of cases including automobile collisions, falls, sports injuries, assaults, and shootings. Dr. Gardiner is an active participant in MEA’s biomechanical research programs. He can be reached at john.gardiner@meaforensic.com. 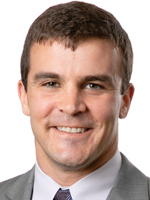 Mr. Cole Young is a project engineer and a member of MEA Forensic’s Collision Reconstruction group. Cole holds Bachelor’s and Master’s degrees in Mechanical Engineering from the University of Minnesota and the University of California at Irvine. A registered professional engineer in California, he examines vehicles, inspects crash locations and analyzes the physical evidence. He is also a Certified Forensic Video Technician through Law Enforcement & Emergency Services Video Association (LEVA). Cole has learned how to extract information such as vehicle speed from security camera, dashcam, and cell phone video. He has testified in court as a collision reconstruction expert and as a video expert. 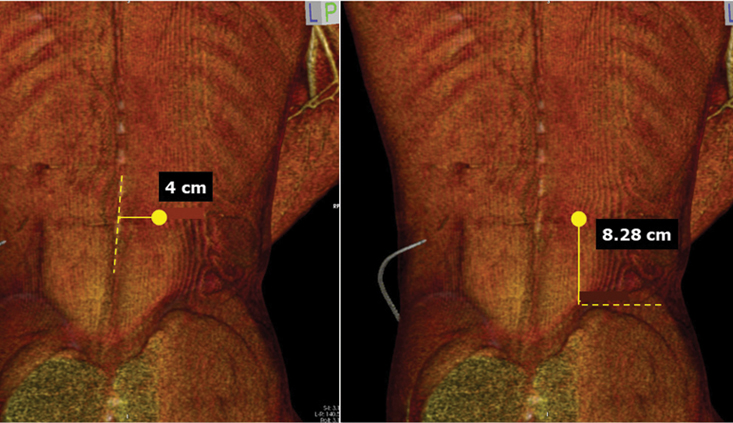 Figure 1A. Medical images used to measure the bullet entry. 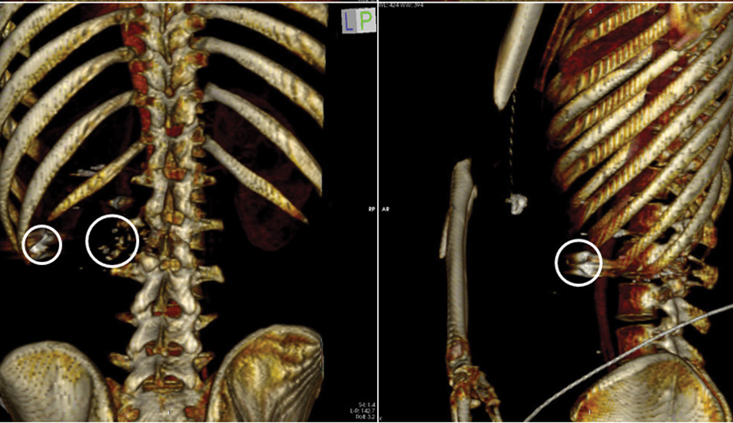 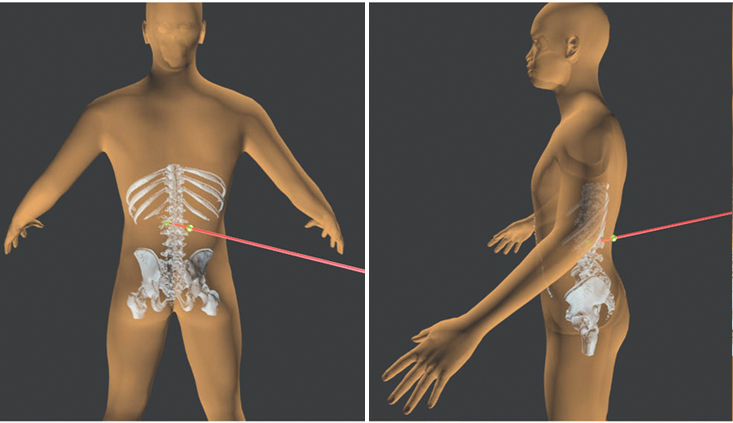 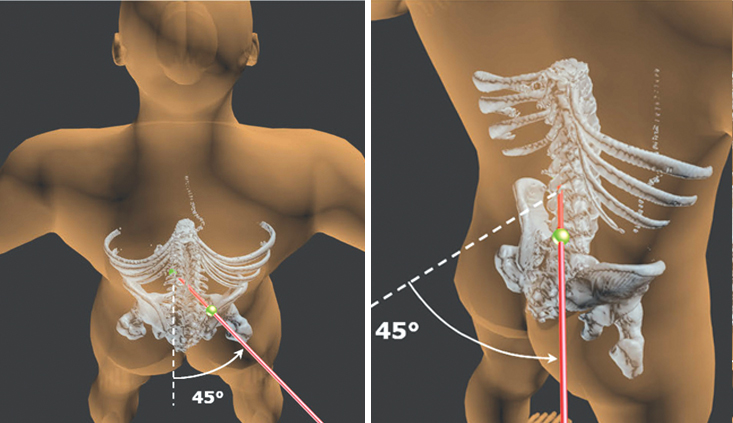 Figure 2B. The shot entered the torso from the rear at approximately 45°. 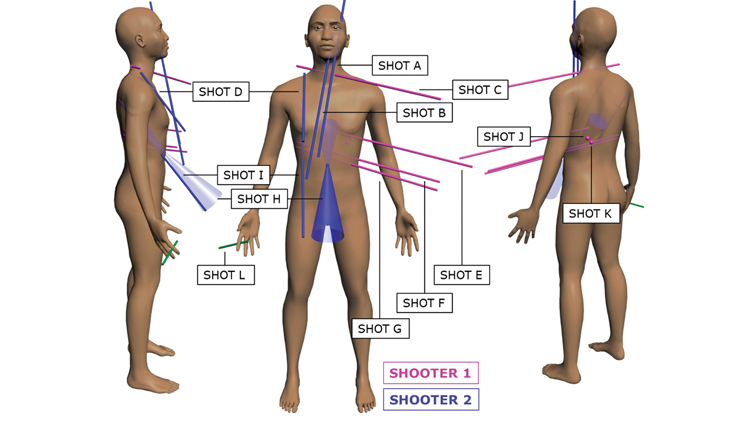 Figure 3. 3D body model of the decedent with shot direction superimposed. The shot directions are based on the wound locations determined during the autopsy. 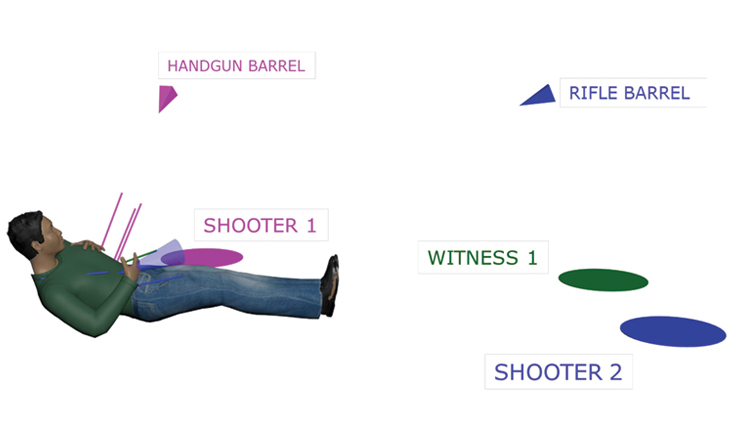 Figure 4. Decedent’s posture during the first series of shots. The decedent was on his back with torso flexed forward slightly. 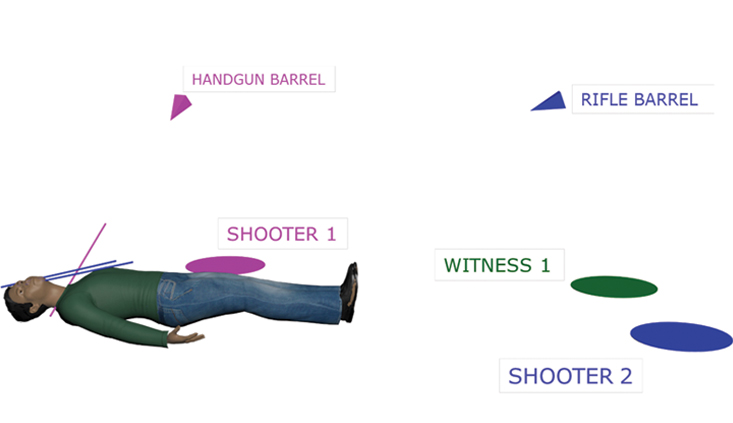 Figure 5. Decedent’s posture during the final shots. The shots to the head and neck were received while the decedent’s head was on or near the ground. 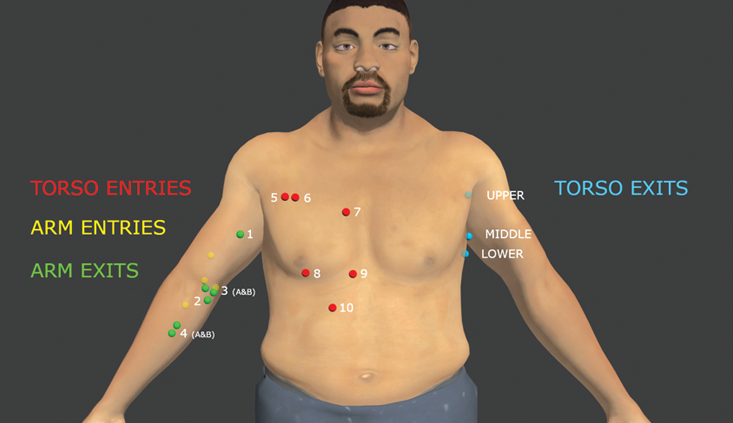 Figure 6. Map of the entry and exit wounds to the body of the decedent. The right arm and torso received bullet wounds. 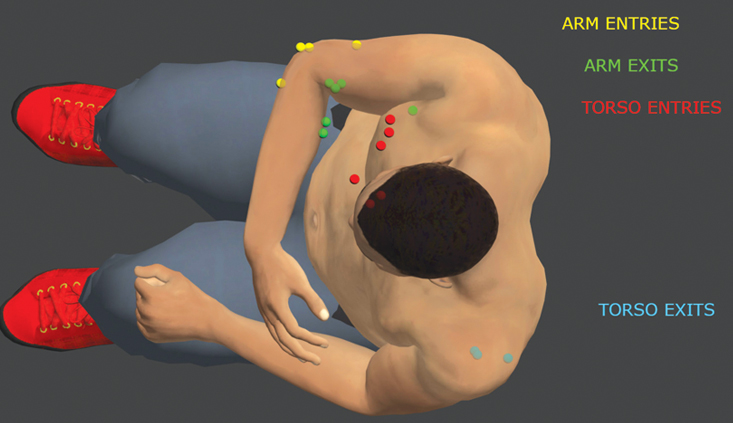 Figure 7. Posture reconstruction from a top view showing the entry and exits to the right arm and torso.