Confession of a black judge

I get frustrated too

This year, we have witnessed the devastation of the health pandemic of COVID-19. To combat the spread of the contagion, people have been forced to stay isolated and to minimize normal social interactions. The pandemic has given us the opportunity to pause and take inventory in our lives. During this quiet time, America has been reminded of a social pandemic which has existed for 400 years. That social pandemic is racism.

Despite my education and position as a Los Angeles Superior Court Judge, I frequently get “demoted” by others who wrestle with the idea that a black man can be in a position of authority. While I do my best to not react, it is frustrating to have to assert my humanity and legitimacy before I am accepted. The two pieces I have submitted in this issue of Advocate capture the frustration I manage on a regular basis. Ultimately, I hope that people can see my skin color, acknowledge that I am a human, and allow my work to speak for me. No, I do not want you to be “color-blind.” I would like you to be open-minded and to receive the truth that a person of color can make amazing contributions to this world when given the same opportunity as others. Thanks for listening and thanks for being willing to grow.

If all lives matter, why aren’t you mad too?

trying to understand the outrage to the hashtag

Black Lives Matter does that get you mad?

is it because you really don’t care about black lives?

you don’t want to focus on them trying to survive?

gonna prove something’s wrong by the end of this rhyme

blame Black Lives Matter it is the fall guy

but Blue Lives is fine as is All Lives

is a black life included when you say “All”?

if that is true I have a question for you all

when anyone is killed we should all feel pain

the race shouldn’t matter aren’t we all the same?

doesn’t seem that way for the black species

the differences? nothing but bull feces

the first thing we hear after the loss of black life

try to justify that that life was trifling

label them a criminal up to no good

change the narrative a thug from the hood

take away the focus from the use of force

put the victim on trial a defenseless corpse

convincing the public they got what they deserved

without a jury a death sentence they had to serve

if the person is bad, we don’t feel bad

when that life is snuffed out some are even glad

but how does one’s rap sheet explain how a person

loses their life in the middle of the street?

back in the day lynchings were like field trips

gather round watch the black in the fire pit

police in the audience now let’s be clear

we can all agree that the cops shouldn’t be

killing unarmed blacks for the world to see

but people don’t see that as a tragedy

and no one held responsible is a travesty

no justice no peace so we can’t be quiet

when you fail to see the problem folk start to riot

how can you stand by when black people are shot?

just make an arrest judge and jury you’re not

the names are many going back to Emmitt Till

being black doesn’t mean you need to be killed

many have died because of gun violence

what’s louder than the shots is your obvious silence

the absence of outrage lack of sympathy

no feelings of regret remorse or empathy

police should make arrests not be the terminator

unarmed and black is the common denominator

if black skin threatens you try a new career

it’s crazy that my skin color creates such fear

what is the solution yes we have a problem

and killing black people isn’t how we solve them

not much has changed from my point of view

we still have so much growing up to do

it’s so frustrating with daily insanity

screaming at the top of my lungs for my humanity

we have to think critically that’s why I ask you

when the color of my skin causes fear

life is going to be tough but let’s be clear

you have no right to take my black life

just because of that fear, so I’m here to fight

I’m fighting for the right to simply be

see my blackness but see my humanity

when I’m guilty of crime just because I’m black

the odds are against me the cards are stacked

this hate is tiring and I’m filled with pain

but I’m going to press on now say their names

I was out celebrating bringing in the new year

I was riding on the BART we were full of cheer

when a fight broke out I was cuffed and detained

I was shot in the back this is not a rant

I’m black and my name is Oscar Grant

I was selling some cigs at the corner store

but the cops had nothing better to do

than to mess with me and give me the blues

I did not have any weapons but those guys were cold

they grabbed me and placed me in a chokehold

I said I couldn’t breathe I said it eleven times

wasn’t hurting anyone and it makes you wonder

I’m black and my name is Eric Garner

I was twelve years old playing in the park

I was playing with an airsoft gun it wasn’t real

and the police rolled up just shooting to kill

I’m black and my name is Tamir Rice

I was pulled over he said that I didn’t signal

I was trying to get out of his way real simple

the stop started bad then it went to worse

I got pissed, I was harassed and I started to curse

I got arrested right there got thrown in the clinker

I would die at the jail said by my own hand

I’m black and my name is Sandra Bland

I also got pulled over by a cop

would you believe that this was my 53rd stop?

I’m being facetious but pay no mind

I was legally carrying a gun and I told him so

didn’t pull it out or threaten him you already know

as I’m following orders to show my i.d.

this cop freaks out and puts four bullets in me

how did this happen this can’t be real

I’m black and my name is Philando Castile

They said that I tried to pass a counterfeit

20 dollar bill but yet I managed to sit

sit still in my car right outside the store

somebody called the police what they do that for?

I was cuffed and detained and placed in their car

then a knee was applied to my neck and back

the whole world saw on video this vicious attack

I said I couldn’t breathe I said help me please

called for my mother already deceased

over 8 minutes I’m trapped under that knee

no one intervened even after my plea

I was unarmed but I was completely destroyed

I’m black and my name is George Floyd

I’m asleep in my bed just minding my own

and these cops come unannounced inside my home

they don’t identify themselves so we think they’re crooks

I thought the right to defend was in the law books?

so my boyfriend shoots and then they shoot back

I get hit eight times and I die that’s wack

another situation where the system failed her

she was black and her name was Breona Taylor

There are so many other unknown names to see

we can’t count the number of the graves at sea

the Middle Passage left a trail of dead slaves

after slavery was abolished did we make headway?

postcards were made “wish you could have been there!”

with women and kids all gathered around

celebrating black death was the talk of the town

this hate is tiring and I’m filled with pain

so I’m asking you to notice and say their names 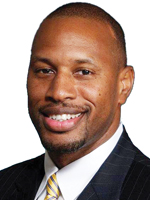 The Honorable Rupert A. Byrdsong was appointed to the Los Angeles Superior Court on June 18, 2014 by Governor Jerry Brown.  He presently sits in Dept. 28 in the Stanley Mosk Courthouse in downtown Los Angeles wherein he handles an unlimited jurisdiction individual court calendar with an inventory of over 500 cases. Prior to coming to Mosk, Judge Byrdsong was the first African-American in the Complex Civil Department wherein he handled and coordinated all of the asbestos cases in Los Angeles County. Judge Byrdsong volunteers his time mentoring young lawyers and speaks to students in high schools, colleges, and law schools throughout Los Angeles. He also volunteers his time to interview prospective students for Vanderbilt School of Law. Judge Byrdsong is active with the John M. Langston Bar Association (lifetime member and past president 2006), the California Association of Black Lawyers (CABL)(lifetime member), LACBA’s Labor and Employment Executive and Saturday Seminar Committees, and a Founding Member of the Association of African American California Judicial Officers (AAACJO). He served on the Executive Committee of the Labor and Employment Section for the State Bar of California from 2003-2007.