It has been announced that off-road and on-beach driving will be banned on Pismo Beach, a beautiful stretch of seashore on California’s Central Coast. Gone will be the sand-raising vehicles that competed with sunbathers for the ocean waves and pleasant breezes.

The outlawing of cars racing up and down the beach brings to my mind a case that I had in 1973 when I practiced at California Rural Legal Assistance in nearby Santa Maria.

Client Mr. Flores lived in Guadalupe, a tiny dot of a town with no stoplights, on the coast ten miles from Santa Maria. He arrived at the office with his wife and three small children, all under five years, to complain about a 1962 Thunderbird that he had purchased from a shady used car dealer. He had told the receptionist that he had been swindled and wanted his money back to get a car that worked.

Mr. Flores was disabled and could barely make it to my second-floor office, located in an old home that had been converted into a law office. With an atrophied left leg, he struggled up the stairs supported by a brace and with the aid of a metal cane. Had I known his condition, I would have met with him on the first floor.

He related to me that the car’s engine would suddenly stall out for no reason and the electrical system would “freeze.” The steering wheel would then “shut down,” forcing him to muscle the car to the side of the road and coast to a stop.

I had never heard of such a problem. But I took his word for it, as well as for a list of other defects in the car and what he related about the assurance that the salesman had given him that “the car drives like new.”

I asked him what he would do if the car died when he was driving in the middle of nowhere. He said that he had three choices: try to hitch a ride home, which usually was impossible because no one wanted to pick up his large family; walk home; or simply start camping out.

Walk ten miles in my shoes

I looked down at his leg and shuddered while thinking about what it might be like walking home up to ten miles on the rural highway from Santa Maria to Guadalupe, limping on a cane and dragging three small children. Before I could inquire about such a trek, he added, “And we’ve done it before.” I was in total disbelief.

I questioned him about what he meant by “camping out.” He informed me that they had everything in the car’s trunk needed to set up camp if the car conked out on him. They would lay out their things at a spot by the road where the car came to rest and decide what to do next. This was decades before people carried cell phones for emergencies.

I told him that I wanted to see the car. Parked in front of the office was a bunged-up 1962 two-door red T-Bird with a white roof and white sidewall tires. I recognized the model from the days when we would eagerly wait for every fall to visit the dealer showrooms to see the new cars. A quick visual inspection, inside and out, readily told me that this clunker had long ago seen its glory days.

Sure enough, he showed me the trunk full of pots, pans, blankets and a couple of cans of Spam. It gave new meaning to the expression “camping out.”

As the Flores family loaded up to leave, I had to ask him why he had picked this vehicle off the used car lot. Gulping with pride, he proclaimed that “Thunderbirds are luxury cars.”

I told Mr. Flores that we would investigate his case and get back to him. We did and then drafted a complaint to be filed against the used car dealer, who had a history of complaints against him for selling misrepresented clunkers to farmworkers.

With the client’s approval, we filed in federal court in Los Angeles with some interesting legal theories. This was out of concern that, when indigents got ripped off, some of the local judges tended to question whose fault it was.

The long and short of the case: We were completely astonished that the defendant immediately hired a Los Angeles attorney and soon settled for a thousand dollars, big money in those days. The dealer appeared to be a front for a bigger fish who supplied used cars to lots that preyed upon poor people in small towns. But that was more than we needed to prove in this case.

Mr. Flores was surprisingly casual about the settlement when he came in for his check.

Now he had enough money to purchase a decent second-hand car, which back then cost a lot less than the amount of his settlement. I gave him some gratuitous advice about avoiding crooked used car dealers and buying something that would drive better than his old T-Bird. He nodded in apparent agreement and was on his way. Case closed. At least I thought so.

About a year later, I was jogging on Pismo Beach on a warm Sunday afternoon. Ducking around the grunting dune buggies, trucks-that-rule and righteous sedans cruising the beach, I noticed the outline of a car coming straight at me from afar. I made it out to be a 1962 two-door blue T-Bird with a white roof and white sidewall tires. As the car got nearer, I saw that it could have used a paint job, and I could hear a loud thunk, thunk, thunk.

When the car bore down on me, I could see that the driver was tightly grasping the steering wheel with his determined eyes glued to the beach ahead, completely ignoring me running at the surf’s edge. I dodged out of the way into a couple inches of water to avoid the T-Bird. It was my client, Mr. Flores, driving his “new” luxury car. So much for my legal advice. 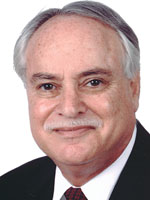 Judge Michael L. Stern has presided over civil trial courts since his appointment to the Los Angeles Superior Court in 2001. He is a frequent speaker on trial practice matters. As an attorney, he tried cases throughout the United States. He is a graduate of Stanford University and Harvard Law School.