While the legal community has evolved, there is still bias toward women in the trial-lawyer community

I had never heard the name Wally Funk, until Jeff Bezos selected this 82-year-old female aviator to be on his recent “Blue Origin” space flight. Curiosity got the best of me and I very quickly began familiarizing myself with thirteen names I was unfamiliar with: Geraldyn “Jessie” Cobb, Myrtle Cagle, Janet Dietrich, Marion Dietrich, Mary Wallace “Wally” Funk, Sarah Gorelick, Jane “Janey” Briggs Hart, Jean Hixson, Rhea Woltman, Gene Nora Stumbough, Irene Leverton, Jerri Sloan and Bernice Steadman. My initial delight at Jeff Bezos’s selection of a woman to be the oldest person ever to fly into space soon turned to disappointment – not that a woman was given this opportunity – but she had to wait so very long to get this opportunity.

Researching the history of these thirteen women reveals that they are all incredibly gifted, intelligent, capable and strong women, who, but for the fact they are women, could have been some of the first astronauts in space for our country. It’s true. Can you imagine the headline: “Geraldyn Cobb becomes the first in space during a suborbital flight aboard HER Mercury capsule named Freedom 7?” Not to take anything away from the accomplishments of Alan Shepard, but it could easily have been a woman in this headline about the first “man” in space.

It could have been one of these thirteen women, known as the “Mercury 13.” Ms. Cobb tested in the top two percent of all candidates for the space program (including both males and females) and she was entirely qualified to become an astronaut. However, her testing was limited by the tests she was allowed to take due to the fact she was a woman. In the end, the Mercury 13 training program was canceled because the women were not allowed to use the military testing equipment needed to complete the final phase of training because NASA had no intention of sending women into space.

Diving deeper into the history of these women uncovers an astonishing list of accomplishments that far exceed those of many of the men in the space industry. For example, one article noted that Ms. Cobb “became a pilot when she was 16. She purchased her first plane with money earned as a semiprofessional softball player for the Oklahoma City Queens, … set three separate world aviation records and was the first woman to fly at the prestigious Paris Air Show.” Ms. Cobb also testified before Congress on whether NASA was discriminating against women, “long before it was illegal.” Ms. Cobb was an outspoken proponent of equality at NASA, advocating that NASA hire the “most qualified candidate, regardless of sex.” She also advocated against NASA’s combat pilot prerequisite because women were not allowed to fly in combat – and that such a requirement guaranteed they would never become astronauts. Not surprisingly, she was subjected to immense criticism for supporting equality.

As for Mary Wallace “Wally” Funk, whom Jeff Bezos tapped to be the oldest person in space, Ms. Funk was the first female air safety investigator for the National Transportation Safety Board, and the first female flight instructor at a U.S. military base. In addition to her numerous lifetime achievements, long before her recent “Blue Origin” space flight, Ms. Funk’s name was inscribed on the Smithsonian National Air Museum’s Wall of Honor.

So, why write today about challenges of female astronauts in the 1960s? Because I have spoken to many women lawyers who have never gotten to the final frontier of civil litigation – trial.

While the legal community has evolved, bias toward women in the legal community still exists and the statistics overwhelmingly demonstrate that women continue to be underrepresented in lead trial-lawyer positions and in law firm partnerships. According to Law360, in 2020 women made up 40% of lawyers in law firms, but only 25% of partners. And although changes are being made, they have occurred at the speed of a tortoise. According to the National Association of Women Lawyers, from 2006 to 2018 there was only a three percent increase in women equity partners in the Nation’s 200 largest law firms. Not particularly encouraging for women lawyers.

Having personally experienced and witnessed countless instances of discrimination and sexual harassment during my years as an attorney, while they may be less brazen and less frequent today than ten or twenty years ago, they are still occurring. Women must still overperform their male counterparts in order to be given the same opportunities and responsibilities. While men are commended for taking a shot at what is ultimately an unsuccessful trial, women are second-guessed and their failure attributed to lack of ability or desire, which oftentimes serves to deny them future trial opportunities.

Times are changing, but not fast enough. We (the collective trial lawyer community “we”) need to continue to welcome women to the profession, mentor them and give them the responsibility they require to succeed, and encourage them to continue doing the amazing work they do every day in this incredibly difficult profession. Women should seek out and surround themselves with other empowering women and men, and serve as mentors to other women in the profession. The opportunities are greater now than ever before, so let’s help push one another into the final litigation frontier. 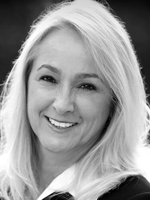 In 2014, Ms. Craig was awarded the Inn’s Angelo Palmieri Civility Award for maintaining the Legal Profession’s Highest Tradition of Professionalism and Civility.