I played soccer until I was 18 years old. At the time, the biggest worry for any soccer players was a knee injury. We took steps every day to strengthen the structures supporting the knee, hoping to prevent ACL tears and the laborious surgical process that goes hand in hand with that injury. But near the end of most practices, when a coach would tack on a strength and conditioning segment, I had pain through the front of my hips. Abdominal exercises like bicycle crunches, v-ups, and dead bugs made the front of my hips painfully pop and snap with every rep. I asked coach after coach, athletic trainer after athletic trainer, and physical therapist after physical therapist what was wrong. The answer was that my abs just were not strong enough and to push through it. It would go away eventually.

Another decade later and my snapping and popping continued to bother me. I would have days where the front of my hip felt stuck, locked in one place, sending shooting pain through the front of my hip and thigh. Sitting at a desk or even lying down was uncomfortable. At 28 years old and far removed from competitive exercise, this was my normal. Around this time, I handled a hip case for the first time and learned about hip injuries and hip arthroscopy. I immediately recognized my symptoms for what they were: hip impingement and likely at this point, two torn labrums.

Fast forward another few years and I could not take the pain anymore. I went to an orthopedic surgeon, told him my suspicions, and one physical exam, one X-ray, and one MRI later, he confirmed my armchair surgeon diagnosis. I underwent a hip arthroscopy on my left side in November 2020, with a labral repair and femoroplasty. I only regret not talking to a doctor about my pain sooner. Surgery on my right side awaits.

The medicine behind the diagnosis and treatment of hip injuries is changing every day. When I played soccer, hip injuries were for old folks who needed replacements to keep walking. Not anymore. While many attorneys are familiar with clients with back and neck pain, hip injuries frequently occur because of car collisions or falls and should not be overlooked given the long-lasting consequences to such injuries, especially for younger, more active people.

The hip is made up of bones and joints, ligaments of the joint capsule, muscles and tendons, and nerves and blood vessels that supply the bones and muscles of the hip. The hip joint is a ball-and-socket joint consisting of the round end of the femur (thigh bone) and the cup-shaped socket of the acetabulum (the hip bone). The hip labrum is a cartilage that covers the acetabulum and seals the hip joint. The articular cartilage lines the acetabulum and the femoral head, providing a coating that creates a slick, frictionless surface.

If you are new to hip injuries, there are some basic terms and conditions you should be familiar with and know to ask your experts about.

Femoracetabular impingement, also known as FAI, is a condition where bony irregularities on the hip joint cause damage to the hip joint with movement. The bony abnormalities can be to the femoral head or neck, making that portion not perfectly round. This is known as CAM impingement. The bony abnormalities can also be to the socket or acetabulum rim, generally resulting in it being overgrown or too deep of a socket. This is called pincer impingement. Most people with FAI have some combination of both forms.

FAI can be a congenital condition – certain shapes of the bones can predispose people to the condition – but the symptoms and the “impingement” part of femoracetabular impingement may be activity or trauma related.

A hip labral tear is damage to the labrum, the tissue responsible for making sure the femoral head moves smoothly within the hip joint. Folks with FAI are unusually susceptible to labral tears. These tears can come in different sizes, but even people with smaller tears or a possible tear on an MRI can be symptomatic and benefit from treatment, including a labral repair.

Bursitis is the swelling of the fluid-filled sacs that cushion the hip joint called bursae. There are two major bursae in the hip area, one covering the bony point of the hip bone called the greater trochanter and one located on the inside of the groin called the iliopsoas bursa. A trochanteric bursitis will usually result in sharp, intense pain at the point of the hip that extends to the outside of the thigh area. Iliopsoas bursitis will result in similar pain to the groin. Falls or other traumatic injuries can cause this injury, as can the progression of spine problems that impact the way someone walks.

While injuries to the bony structure of the hip such as a hip or pelvic fracture will likely be obvious from the date of the incident, injuries to the cartilage or ligaments of the hips often take some time to diagnose, particularly when there is another traumatic injury, such as a femur fracture or injury to the back.

The bony structures that create femoracetabular impingement are visible from an X-ray, whereas you need an MRI to diagnose a labral tear correlated with pain findings. Commonly on physical examination the doctor will draw the patient’s knee to her chest, then take it across her body. If this causes pain (or in this author’s case, pain and a very large pop), that is an indication of a labral tear or some other condition in the hip causing pain.

Hip injuries can require a variety of different treatments including physical therapy, injections, and surgery.

Injections for the hip joint can also have a diagnostic function. If the numbing medicine in the injection provides immediate pain relief, that is confirmation that the hip joint is the source of the pain. If a patient feels no relief within ten days following the injection, the patient is unlikely to gain any improvement and further diagnostic testing may be needed.

For hip arthroscopy, a surgeon inserts a pencil-sized optical device into the hip joint, allowing them to view the hip joint on a large monitor. Usually, the surgeon only needs to make two or three very small incisions. Surgeons can perform a variety of different hip procedures during a hip arthroscopy, including synovectomy, treatment of labral tears, impingement procedures, and hip dysplasia procedures.

Treatment of labral tears and impingement procedures are some of the more common hip-arthroscopy procedures. The goal of any labral-tear treatment is to retain as much of the healthy cartilage as possible. If the labral tissue is healthy enough, the surgeon can place an anchor into the acetabular rim bone and attach it to a suture that pulls the labral tissue back together, tying it down to the acetabulum. Labral tear procedures can also include labral debridement, where the surgeon trims away involved tissue.

Arthroscopic hip surgery can also include microfracture surgery, which is a technique to treat cartilage injuries that involves stimulating the formation of new articular cartilage by drilling many tiny holes in the bone underneath the damaged cartilage, hopefully resulting in new blood clots in the cartilage, which then stimulate more growth known as fibrocartilage.

While many patients with labral tears may wish to avoid surgery, these patients benefit from surgical intervention to relieve pain, improve movement, and stall the more rapid wear and tear on their hip joints that will lead to the need for a total hip replacement. Forgoing an arthroscopy may speed up the road to a hip replacement.

While both hip arthroscopy and open hip replacements are most often outpatient procedures, recovering from either procedure requires a support system and will be difficult for patients who live alone. Especially for the first few days, everyday activities of living such as getting out of bed, using the restroom, showering, preparing food, and getting dressed are very difficult, even though patients can partially bear weight immediately (barring certain surgical outcomes or a microfracture procedure, most surgeons performing this procedure recommend waiting six weeks before even partial weight bearing).

Most surgeons recommend icing your hip as much as possible post-surgery. Patients also typically receive a prescription for pain relief medication that they can expect to use for the first two weeks after surgery. During the first few weeks after surgery, many patients opt to install a raised toilet seat and use a shower chair. A grabber helps since bending down is difficult for several weeks. Anecdotally, I also recommend a loud bell of some sort to irritate your spouse or other support system as much as possible.

Full weight bearing is not common until after four weeks, but full recovery from hip surgery can take upwards of a year. If the procedure occurred on the left side of the body, the patient can drive within two weeks of surgery. However, if it occurred on the right side of the body, the patient should not drive for the first six weeks of surgery. This important distinction makes a large impact in a patient’s ability to get the procedure in the first place and in the level and length of support a patient will need.

The defense will often argue that those with FAI were a ticking time bomb for a labral tear or other cartilage damage and that folks with FAI in certain age and sex demographics will inevitably need hip surgery one day. Much like other orthopedic injuries, you must force the defense expert to admit that she cannot state to a reasonable degree of scientific certainty that the collision did not exacerbate an underlying condition. FAI itself does not mean that a person is in pain, it just means the person’s bones are shaped in a way where impingement is more likely.

The defense will often also argue that the collision or incident did not cause the hip labral tear, that it was pre-existing. There have been extensive studies on the prevalence of asymptomatic labral tears, particularly in patients with FAI. Those tears later can become symptomatic due to trauma.

Another common defense argument on hip-injury cases is that the plaintiff did not treat conservatively for long enough and the surgery was and/or is unnecessary. However, if the plaintiff has hip impingement causing them pain, studies have shown that these patients do not receive sufficient relief from physical therapy and opt to proceed with surgery. You should confront defense experts with these studies and also ask them how many patients they have encountered in their practice who come in complaining of pain to the groin or front of the hip, get an MRI that shows a labral tear and an X-ray that shows impingement, then find their pain complaints are gone after three months of physical therapy. You will get the answer you expect.

Very seldom does the defense retain a doctor who specializes in hips. You will more often see a general orthopedic surgeon or a spine surgeon. Particularly if this surgeon is older, you will find that the surgeon is unlikely to have ever performed a hip arthroscopy. Given the rapid rate at which the science changes on hip-injury cases, consulting with an expert even informally about changes in recommendations and treatment outcomes is a good idea and will put you miles ahead of the defense. 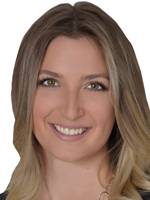 Casey Hultin is a trial attorney at Dolan Law Firm PC in San Francisco. Her practice focuses on personal-injury law. Ms. Hultin is a graduate of University of California, Berkeley, School of Law.