It’s not just about bathrooms

Transgender1 people come from all walks of life. They are a diverse community, representing all racial, ethnic and
religious backgrounds. The rights of transgender people have been in the news a lot lately with the recent debate and laws being passed around the country related to the use by transgender people of public restrooms that match their gender identity.

The main focus of this debate seems to be the idea that allowing transgender people to use public restrooms will lead to assaults in restrooms by predators. Not surprisingly, not only is this claim not based on any real evidence, it is actually baseless, contrary to the evidence, and perpetuates the false stereotypes transgender individuals continue to face. Indeed, it ignores the realities of what transgender people are subjected to in countless aspects of their lives.

As of March 2017, 19 states, the District of Columbia and more than 200 municipalities have anti-discrimination laws and ordinances allowing transgender people to use public facilities that correspond to their gender identity. There is no evidence these laws have led to attacks in public facilities or otherwise created any negative impact on the public.

Rather the opposite is true. The more common reports are reports of transgender people being assaulted in bathrooms that do not match their gender identity. In one of the largest surveys of transgender and gender non-conforming Americans ever conducted, 70% of respondents reported being denied access, verbally harassed, or physically assaulted in public restrooms.2

Sadly, this has been, and continues to be the plight of our transgender communities throughout the country, yet the baseless claims against providing this community with basic rights persist. Indeed, bathrooms are really just the tip of the iceberg as transgender people in our society experience a host of issues on a daily basis:

Though this is a vulnerable population with needs for legal support in a variety of areas, the picture is not
completely bleak.

Federal courts, the U.S. Equal Employment Opportunity Commission (EEOC), and the Department of Fair
Employment and Housing (DFEH) have, in one form or another, concluded that discrimination because a person is
transgender or gender non-conforming constitutes illegal sex discrimination. Many states and localities also expressly prohibit job discrimination based on gender identity and/or expression, including California.

The statutes and legal precedents provide that transgender employees have the right not to be fired or refused a job or promotion because they are transgender. This is true even if the state and locality have not passed laws explicitly prohibiting gender identity discrimination.

Equally, transgender employees have the right to safe and adequate access to restrooms and other facilities consistent with their gender identity. According to the Justice Department and the EEOC, denying access to facilities consistent with a transgender person’s gender identity can constitute discrimination. Employers cannot demand medical or legal documentation of an employee’s gender as a condition of restroom access, or limit them to using a specific restroom separate from other employees. Agencies also cannot require transgender employees to use facilities that are unsanitary, potentially unsafe, or located at an unreasonable distance from their work station.

California’s protection of these rights is not only provided through the Fair Employment and Housing Act (“FEHA”), but other statutes provide legal recourse to the transgender community that we should all keep in mind.

Although FEHA does not specifically state that transgender status is a protected status, it does protect employees from discrimination based on “sex.” (Gov. Code § 12926, subd. (r)(2).) Under the FEHA, “sex” includes a person’s gender, gender identity and gender expression. This means the FEHA actually protects either the person’s actual gender or a defendant’s perception of that person’s gender, including an identity, appearance or behavior that is different from that traditionally associated with the person’s gender at birth.

Indeed, the FEHA requires an employer to allow an employee to appear or dress consistently with the employee’s gender identity or gender expression. (Gov. Code § 12949.)

Moreover, the Department of Fair Employment and Housing (“DFEH”) guidelines, issued on February 17, 2016, interpret the FEHA as protective of both physical transition, where someone receives medical treatment (e.g., hormone therapies or surgical procedures), and social transition where someone begins to socially identify with a new gender, change their name, pronouns or bathroom usage. As a result, a transgender person is protected under the FEHA through any stage of their identity or transition.

The guidelines also prevent an employer from asking an applicant or employee questions to try to detect their gender identity or about whether or not they have had or are planning to have surgery. (See http://www.dfeh.ca.gov/files/2016/09/DFEH163TGR.pdf.) They prohibit an employer from enforcing a dress code in a discriminatory manner. A transgender person should be permitted to dress in a manner that is suitable for that person’s gender identity.

Finally, it provides that all employees have a right to safe and appropriate restroom and locker room facilities. This includes the right to use a restroom or locker room that corresponds to the employee’s gender identity, regardless of the employee’s assigned sex at birth. In fact, where possible, an employer should provide an easily accessible unisex single stall bathroom for use by any employee who desires increased privacy, regardless of the underlying reason. Such use should always be a choice, and not a requirement or to avoid harassment.

There are other potential California statutes that can provide protections for transgender workers. For example, independent contractors could seek protection under the California Unruh Civil Rights Act which requires businesses to provide full and equal accommodations on the basis of “sex,” among other things. (Civil Code § 51, subd. (b).) Moreover, Civil Code section 52.1, 52.4 and 52.45 allow for private civil actions to enforce the right to be free from violence or threats of violence and intimidation, specifically “gender violence.”

Another avenue is found under Labor Code sections 1101 and 1102, which prohibit employers from preventing an employee’s political activity, or punishing an employee due to that employee’s political activity. The California Supreme Court has interpreted “coming out” by lesbian, gay, and bisexual employees to constitute such protected political activity. Likewise, if you disclose your gender identity or openly transition from one gender to another, you may argue that these actions are protected political acts. This law may be especially important for employees who work for employers with fewer than 5 employees, because those employers are not covered by the FEHA.

As for federal protections, though it is unclear what may happen under the Trump administration, several avenues are currently available for transgender employees to pursue federal discrimination claims against employers who violate their rights. Title VII of the 1964 Civil Rights Act prohibits discrimination on the basis of sex (among other characteristics) by an employer with 15 or more employees. Although there are some court decisions, mostly older ones, saying that Title VII does not prohibit gender identity discrimination, several federal appeals courts that have considered the issue recently have found some protections in the Civil Rights Act for transgender people.

There is also protection under 42 U.S.C. § 1983, a part of the Civil Rights Act of 1871. This act prohibits the deprivation of rights under the Constitution. Specifically, in this instance, discriminating against someone on the basis of his or her nonconformity with gender norms or gender stereotypes would be sex based discrimination under the Fourteenth Amendment Equal protection Clause. (Glenn v. Brumby (11th Cir. 2011) 663 F3d 1312, 1316.) It is important to note that claims under 42 U.S.C § 1983 require state action and therefore, rarely apply to private employers. (Rendell-Baker v. Kohn (1982) 457 U.S. 830, 840.)

So in the end, the issue is not simply a transgender employee’s right to use a particular bathroom. Our transgender communities are subjected to discrimination in countless aspects of their lives, including in the area of employment. Although we are all fearful that transgender people will lose more rights in these current times, until that day comes, it is important to remember that there are many statutes that exist that can be used to protect transgender workers today. Like any other person, transgender employees have every right to be treated fairly and be provided a workplace free of harassment and discrimination. It is our job as advocates and trial lawyers to ensure those rights and protections are enforced and preserved. 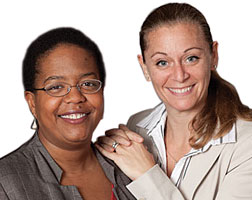 Elizabeth Riles (on left) and Karine Bohbot are partners in the Law Office of Bohbot & Riles and have been practicing employment litigation for the last 19 years. If you are looking for further information on this subject, or any related employment matter, e-mail either Ms. Bohbot at kbohbot@strikebacklaw.com or Ms. Riles at eriles@strikebacklaw.com.

Karine Bohbot (on right) and Elizabeth Riles are partners in the Law Office of Bohbot & Riles and have been practicing employment litigation for the last 19 years. If you are looking for further information on this subject, or any related employment matter, e-mail either Ms. Bohbot at kbohbot@strikebacklaw.com or Ms. Riles at eriles@strikebacklaw.com.