Full investigation of the accident scene can reveal other responsible parties

When the primary defendant is underinsured, a thorough investigation of the accident scene can yield surprising evidence of negligence by other parties

In many seemingly clear-liability incidents, pedestrian- or bike-versus-car, we are faced with hurdles. A common hurdle is a badly injured person and very little available insurance. That’s why it is important to completely investigate the incident. Complete investigations include a visit to the location – preferably by you, although sometimes through a private investigator. This can yield crucial evidence like surveillance video that would otherwise be overwritten or disappear. This article demonstrates how we were able to locate another responsible party despite all the witnesses indicating the defendant driver had run a red light and struck our client in a crosswalk.

During discovery, it became clear that the contractor had improperly narrowed the lane of travel to less than 10 feet, in violation of San Francisco construction regulations. The concrete truck that was on-site and legally parked within the coned area also caused/contributed to this incident because it blocked the line of sight for drivers to see one of the two traffic lights as they approached the intersection. The Court of Appeal has held that it is reasonably foreseeable for a legally-parked commercial vehicle to block the views of passing cars and cause a collision. (Lawson v. Safeway (2010) 191 Cal.App.4th 400).

Using these theories of liability we were able to establish liability well beyond the driver, which was necessary, given that the driver had minimal insurance.

At the intersection of Turk and Laguna in San Francisco, our client was struck while walking northbound within the crosswalk on the western side of the street. Turk is a two-lane, one-way westbound street and Laguna is a two-lane, two-way north/south street. Driver was traveling westbound on Turk and struck the pedestrian after she had gone more than halfway across the street. All eyewitnesses said that the driver ran the red light and that the pedestrian entered the crosswalk on her green.

Normally, that would be the end of the analysis, but the severity of the pedestrian’s injuries required a full
investigation into any other potentially liable entities. At the time of the incident there was a sidewalk repair project on Turk, east of its intersection with Laguna.

Notice that the concrete truck was parked toward the front of the construction site, but fully within the construction site. In this intersection, there are two traffic lights: one on each side of the intersection, on the opposite side of the street at about 10 feet off of the ground. There is no center traffic light positioned directly in front of westbound traffic on Turk.

On the day of our incident, though, the right traffic light was completely blocked from all westbound traffic on Turk for at least 1,000 feet before the intersection by the position and height (11 feet tall) of the concrete truck. This blockage left the already obscured left traffic light as the only usable light for traffic. The driver testified at deposition that he did not live in San Francisco and never saw any traffic lights prior to hitting the pedestrian.

California case law provides that “it is readily foreseeable that parking a large commercial truck near an intersection may obstruct the views of passing motorists and cause them to collide.” (Lawson v. Safeway, 191 Cal.App.4th 400.)   The Lawson matter engaged in a detailed analysis before extending liability to legally parked vehicles:

First, this case involves an extremely large commercial truck. Such trucks create a greater than normal risk because by sheer size they obstruct more of the view than smaller vehicles. Second, expert testimony was presented that the drivers of such trucks receive professional training that includes, or should include, the need to take other drivers’ sight lines into account when parking. … Third, …[t]he risk of serious injury is greater than normal at the intersection because of the speed of the traffic and the nature of the traffic… Fourth, Wilburn had other places to park without creating a hazard. … ‘If the actor reasonably can accomplish the same result by other conduct which involves less opportunity for harm to others, the risk incurred in the manner of doing business which resulted in injury is clearly unreasonable.’

With this legal backdrop, the analysis is clear. Despite being legally parked, there was a valid argument as to the liability of the concrete subcontractor by virtue of where the concrete truck was parked. Given the truck height, the position of the right traffic light, and the already present sightline issues with the left traffic light, it was reasonably foreseeable that the concrete truck was blocking the driver’s sightline and could contribute to a collision.

Plaintiff was able to determine that the cone placement in the road left between 8 and 9 feet available to traffic in the number 2 lane. While this was more than enough “room” for the driver’s car, it was narrower than the minimum lane width at or near construction sites in San Francisco.

All street construction projects in San Francisco are governed by The Regulations for Working in San Francisco Streets (also known as the Blue Book [https:// www.sfmta.com/sites/default/files/pdfs/Blue Book8thEd_Accessible.pdf]). It states, “This manual establishes rules and guidance so that work can be done both safely and with the least possible interference with pedestrians, bicycle, transit and vehicular traffic.”

Blue Book § 3.2B requires lanes to be no less than 10 feet, including any cones placed at a construction site. At deposition, the Contractor PMQ testified that they never measured the width of the lanes affected by their cones, there was no policy regarding these minimum widths, and that the number 2 lane was less than 10 feet wide. The contractor essentially admitted that it violated City regulation, paving the way for a negligence per se argument, leaving only causation to prove.

In order to show causation, plaintiff argued that the narrowed lane and position of the concrete truck combined to create a complete bar to seeing the right traffic light. The narrow lane required him to pay more attention to avoiding the cones and also created a concern that he would strike workers or heavy equipment immediately within the cones. These close proximity hazards reasonably drew the driver’s attention towards the right as he traveled next to the construction zone. Once the driver’s attention was focused on his right, the location of the concrete truck blocked his sightline of the right traffic light. This argument tied the contractor and concrete subcontractor’s conduct together and made it reasonable for the driver to miss the traffic light altogether.

Our duty to our clients requires full investigation into all of the possible parties that may be liable to them. In many situations, further investigation may not yield additional liable parties, but the only way to find out is to fully understand the mechanism of the incident from each party’s perspective. 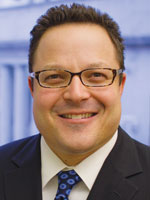 Casey A. Kaufman is an attorney with the Brandi Firm, San Francisco. He is a member of the California, Arizona, Nevada, Washington State and Washington, D.C. bars, where he represents clients in personal injury, product liability, and wrongful death actions. He is Martindale-Hubbell AV Preeminent rated and was named as a Super Lawyer Rising Star for Northern California, 2009-2013.