We can all spread some kindness

Can you find something generous to do today?

A recent L.A. Times article reported that the number of hate crimes in California surged more than 17 percent between 2016 and 2017, according to new data released by the state Department of Justice, the third straight year of double-digit increases. Local law enforcement reported 1,093 hate crimes last year. Incidents involving a person’s real or perceived sexual orientation jumped nearly 19 percent, with 246 crimes committed last year, compared with 207 the year prior. Crimes against gay males accounted for the largest number, with 172 last year. Those involving anti-Hispanic or anti-Latino bias jumped about 52 percent in 2017, with 126 incidents reported. Crimes involving anti-black or anti-African-American bias jumped more than 20 percent.

On July 4, a 92-year-old man was pushed down to the ground and beaten with a brick, suffering a broken cheekbone and bruises to his face. The man, from Michoacan, Mexico, who regularly visits his family in Los Angeles, was told to “go back to your country, go back to Mexico” as he was getting attacked by a woman and a group of men.

Hate crime statistics have increased nationally as well. The National Crime Victimization Survey reports the number of potential hate crimes at almost 250,000 per year. Recently, a Chicago woman wearing a Puerto Rico flag shirt was being harassed for over 40 minutes by a man telling her that she should be wearing a United States flag and questioned her citizenship while a police officer ignored her plea for help. The police officer cowardly resigned after the incident was recorded on Facebook and the video went viral.

An emergency physician was called to a Texas facility to clear an eight-year-old boy for psychiatric treatment as a result of being separated from his parent during the latest “zero-tolerance” approach toward migrants arriving at the U.S.-Mexico border. The young boy, who had been in custody for over a month without reunification in sight, was escorted by four armed Caucasian police officers while he waited for the doctor. The physician reported, “The boy seemed devastated – quiet and withdrawn. He barely spoke. I asked if he needed a hug. I kneeled down in front of the recliner, and this kid just threw himself into my arms and didn’t let go. He cried and I cried.” The response by one of the police officers to the physician was that she was rewarding his bad behavior.

These stories (and many others reported daily) made me cry. They made me angry. They made me shake my head in utter disbelief that our society has developed so much hatred for each other. While we can’t prevent the 92-year-old man from being beaten and we can’t go to the Texas border to hug every child separated from his or her parent, we can start spreading some love and compassion. These stories are our call to action.

Recently, my family and I handed a backpack full of toiletries and necessities to a homeless man on the side of a freeway. He was so grateful for these items, stating that he had recently been released from jail and had nowhere to go and no possessions. He gave us a toothless smile and offered us God’s blessings. (The backpack was compiled by Operation Helping Hand, a charity started by attorney Kim Valentine.)

I promote courtesy, kindness, respect, and consideration with the hope that recipients will pass on the same positive acts. I smile and say “hi” to strangers in an elevator and can feel the awkward tension dissipate. I smile and ask checkers at the grocery store how their day is going. I have bought strangers a cup of coffee or a pastry when it appeared that they were short of money. Recently, my daughters spotted a man who forgot his wallet and was calling his wife to Venmo him some money so he could pay for a box of baked goods. My 13-year-old whispered for me to pay for him, so I gave her my credit card to approach the cashier and offer to pay for the $10 worth of goodies. He was so grateful and thankful and wanted to somehow pay me back. I told him to pay me back by paying it forward.

I am trying to be a role model for young people. The comments on my recent Instagram post of buying four servicemen lunch without their knowing about it were mostly from girls under 15 years old. While I’m sure they leave responses on everyone’s post, I was glad that they took notice of what I did and took the time to offer their comments. I hope that they will someday do something generous and kind as a subliminal result of my acts.

Can you spread some love and kindness? Tag, you’re it. 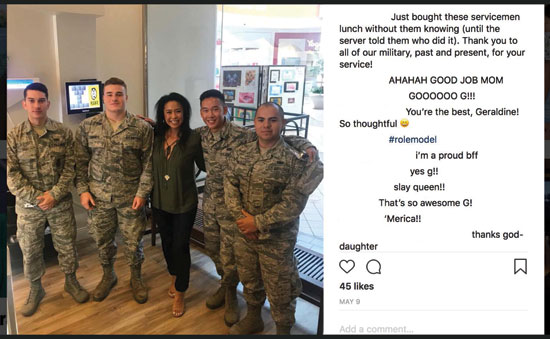